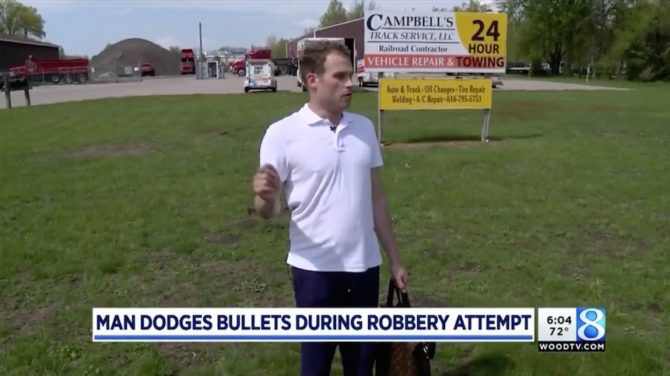 How can you tell Jerad Kluting’s Louis Vuitton bag isn’t a knockoff?

Well, here’s one solid giveaway: He was willing to risk his life to hold onto his prized possession.

Kluting was walking down Riley Street in Holland Township, Michigan, at around 5 p.m., minding his own business, when a 21-year-old man approached him and demanded the bag.

Showing he meant business, the mugger fired at least three shots from a handgun. Kluting later said he thought the first two were warnings, but that the third was meant to hit him.

“It happened very fast. In one motion he took the gun out of his waist belt and with the other hand put up a bandana over his mouth and pointed, was like, ‘Give me your bag,’” Kluting explained to local NBC station WCMH. “I was like, ‘You’re not getting my Louis Vuitton.’ I worked very hard for this and this bag I’ve had forever and it means a lot to me. I wasn’t about ready to relinquish it to some thug that was going to demand it from me.” 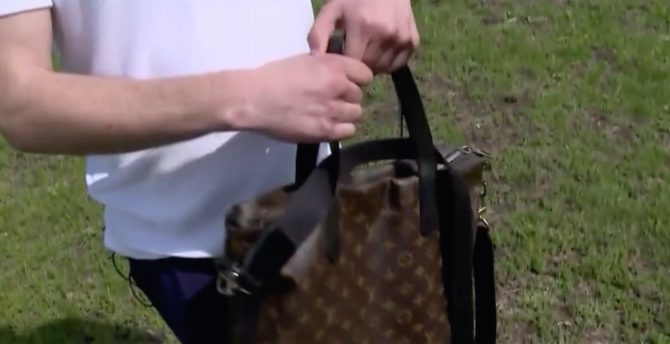 Kluting added that the particular design he totes is no longer in production.

“I paid $1,700 for it or thereabouts. … I love Louis Vuitton and I saw this bag long before I could buy it and I saved up my money to buy it,” Kluting continued. “It means a lot to me. … It represents me. I wasn’t about to relinquish my personal property.”

It goes without saying that putting your life on the line for any material object is ill-advised, but as Kluting put it:

“As my grandmother would say, if you’re born to hang, you’ll never drown.”

He says the bag has even deeper meaning for him now.

“I got my bag,” Kluting said. “He can pry it out of my cold dead hands.