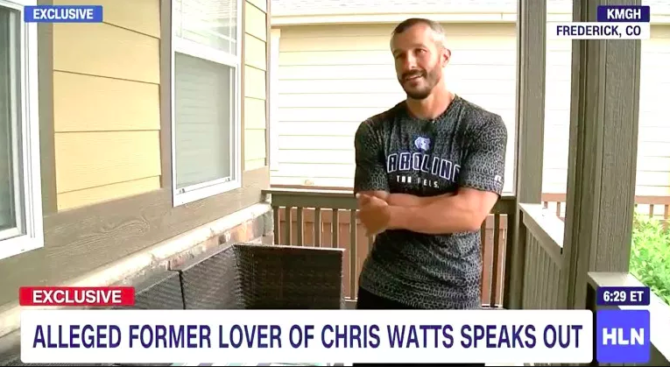 A man claiming to be the secret lover of Chris Watts, who is accused of murdering his wife and their two kids, has come forward to say he engaged in an ongoing sexual relationship with Watts for nearly a year.

To make a long and truly horrifying story short: Watts is charged with murdering his pregnant wife and two kids in Frederick, Colorado.

His wife Shannan’s body was found buried in a shallow grave in Watts’ former boss’s yard. Their daughter’s bodies were found submerged in crude oil in drums nearby.

At first, Watts played the victim by making public pleas for his family’s return to local media outlets. After the bodies were discovered, he told police he killed Shannen after she strangled their daughters because he told her he wanted a divorce.

Now, an unidentified man who says he was Watts’ lover spoke with HLN host Ashleigh Banfield to talk about their alleged affair.

The man claims they met on the dating app MeetMe and engaged in an “instant” sexual relationship.

“He reached out to me and messaged me,” the man alleged in the interview. “It was small talk. He told me his age. He had two daughters. He told me he was looking for a relationship in the long run.”

“I asked why his profile said straight. He said he was not out and not ready to be out as far as sexuality.”

The man claimed he and Watts maintained a close relationship for about 10 months.

“We had many conversations,” he said. “I asked him to make sure he’s not bisexual cause he had two children. He told me he didn’t know.”

“At that moment he was attracted to me as a male.”

The man went on to explain that eventually that, in the beginning, Watts lied and said he was single. It wasn’t until much later that he admitted he was married, but that he and his wife “didn’t have sex anymore.”

“I asked why he lied to me. He told me he knew he wouldn’t have a chance with me if he told me he was married. He told me what I wanted to hear. He knew I had good morals.”

The man also said Watts said Shannen was an abusive partner and that their marriage was miserable.

“I could see in his eyes he was very unhappy.”

Asked whether thought Chris had committed the crime, the man responded, “no and yes.”

“You never really know what someone is capable of and the way he portrayed himself as the victim and made me feel sympathy for him,” he said. “Sociopath’s can easily lead to different lives and different emotions.”

“I hope he gets convicted and I hope he stays in prison for the rest of his life.”