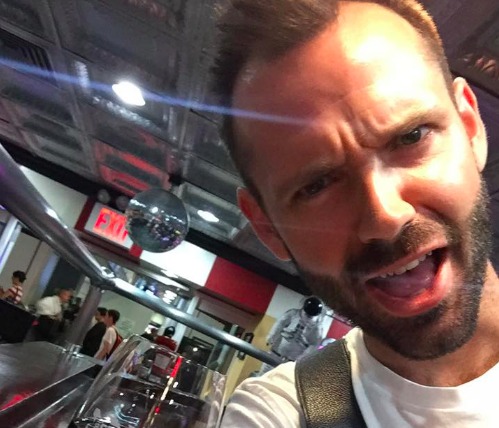 Chris Donohoe caused a bit of a sh*t storm this week when he took to social media to claim he was the target of antigay discrimination at the hands of a homophobic hotel manager in Las Vegas.

But is he really the victim he claims to be?

It all started when Donohoe was kicked out of the pool at the Wynn Las Vegas for violating its “no speedo” policy.

“I was kicked out for being a gay man wearing a bathing suit that was just a little too gay for the The Beach Club Encore Las Vegas to tolerate,” he wrote on Facebook.

Donohoe went on to say he was “up all night because I couldn’t sleep from being so upset” and that he has “cried so much” as a result of the treatment he received.

“The thing that really upsets me about this is there were women with their titties out everywhere,” he said, “but as soon as a man shows up looking gay AF they’re told ‘no, you don’t belong here.’”

He continued: “I’m a white guy and I have power in society and I still felt completely powerless.”

Hi! To all my gays and queer folk. If you want to be out and proud DO NOT GO TO @WynnLasVegas got kicked out pool for being gay yesterday https://t.co/ex0Wco0GzJ #gaytravel

In response, Wynn Resorts, which has a 100% approval rating on the HRC’s Corporate Equality Index, had to do damage control. It issued a statement apologizing for the confusion and saying it will allow speedos to be worn in the pool going forward.

“Regarding LGBTQ+ guests, our policy has been clear and consistent for years:  Wynn welcomes and appreciates all of our LGBTQ+ guests,” the statement read. “Decisions to enforce policies are solely based on guest behavior, or in this case, attire. We have always and will continue to apply attire policies equally to all of our guests, regardless of sexual orientation.”

This seems to have satisfied Donohoe. In an update posted to his Facebook page Wednesday afternoon, he writes:

The folks at Wynn Las Vegas met with me and also publicly apologized for how I was treated at the Encore Beach Club. They also abolished the “no Speedo” rule and have committed to do training with their employees on how to handle this type of situation next time around. The director I spoke with was gracious and thanked me for bringing this issue to their attention so that they can make positive changes at the hotel.

Donohoe goes on to say he’s still “super shaken” by the experience but he’s glad it has lead to “impacting positive change.”

He concludes the post with a message to all his supporters and to the LGBTQ community at large:

To the Queer community — and especially the freaks, outsiders, and folks at the margin — stay fab AF and know that you have a place in this world. You belong! You are worthy! And you have nothing to be ashamed of!

But a closer look at Donohoe’s Twitter page finds this isn’t the first time he’s claimed to be the target of questionable homophobic abuse.

Earlier this year, he also took to Twitter to call out the TSA for allegedly profiling him for being gay by asking him to “spread his legs.” The incident left him so disturbed that he forgot his laptop behind:

I was profiled and searched for being gay by @TSA today at Houston Bush airport @iah … “spread your legs wider…wider” the agent repeated. So messed up. Left my laptop at security I was so upset

Look, we get it. Homophobia happens. We report on it each and every day. It’s horrible and needs to stop.

But it’s important, as members of the LGBTQ community, that we not to throw out accusations of antigay abuse just because something doesn’t go our way.

There’s a different between being targeted and simply being asked to follow the rules.

Related: Five Gay Hoaxes That Had Us Fooled