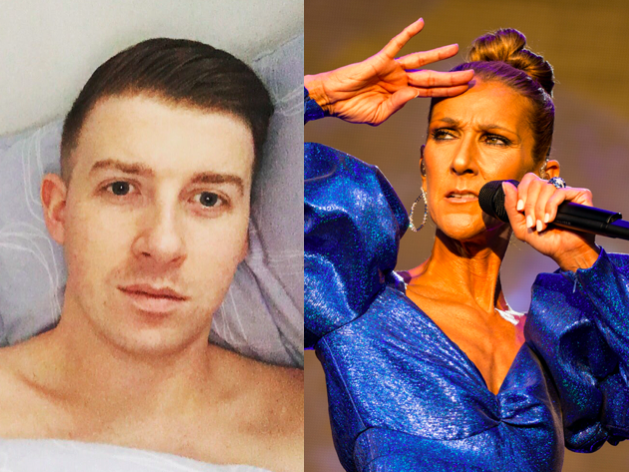 The man formally known as Thomas Dodd says he has absolutely no regrets after legally changing his name to Celine Dion over the holidays.

Dodd, er, Dion poured himself a glass of wine and streamed one of the singer’s concert films on Christmas.

It wasn’t until several days later he discovered that, at some point during the viewing, he went online and paid £89 ($120 U.S.) to officially adopt her name for himself.

Tier 4 is the least of my worries – I’ve just got home to some post. Apparently at some point over Christmas I’ve had one too many vinos and legally changed my name to Celine Dion! pic.twitter.com/ZchXWiqhUw

Dion, who says he may be “slightly obsessed” with the Canadian songstress, didn’t actually make the discovery until he got home from work a few days later and found a letter waiting for him.

“I walked in from work and there was a big white envelope with ‘do not bend’ written across it,” he explains. “I nearly passed out in my kitchen when I opened it.”

“My initial concern was how on earth do I tell the HR department at work that I need to change my email footer!?” he continues. “Now I’m thinking it could be a great way to get backstage.”

Dion has no recollection of making the change, or of paying an extra fee to have eight additional certificates printed confirming his new identity.

“I’m just praying I don’t get pulled over by the police for anything,” he says. “That could get awkward!”

I don’t know who should take credit for this? ??? pic.twitter.com/PYXJDmrpde

While most people have found his story amusing, Dion says his mother was mildly horrified when she first learned what her son had done.

“My mother didn’t see the funny side though,” he says. “I did explain it could be worse and it could’ve been Boris Johnson. We’re just lucky he doesn’t have any live concerts.”

As for what he plans to do next, Dion hasn’t decided yet.

“If this gets to Celine someone best make sure I have a defibrillator next to me.”

Related: WATCH: Celine Dion sings karaoke to one of her own songs in NYC drag show