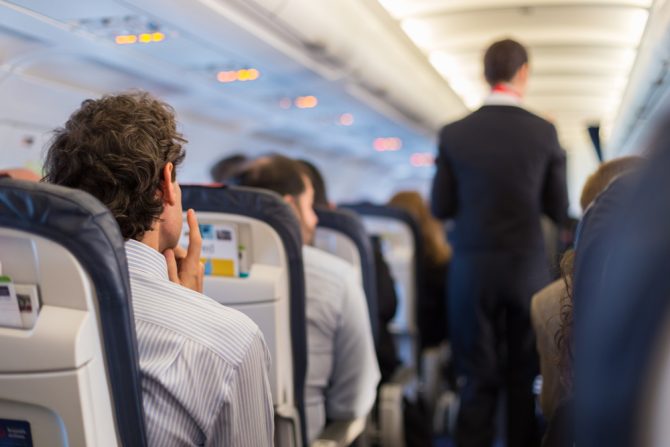 An unruly airline passenger with a long history of bad behavior is headed off to prison after pinching a male flight attendant’s butt and calling him “gay boy” during an international flight.

Gavin Capps was just sentenced to six months behind bars after pleading guilty to one count of sexual assault and one count of threatening words or behavior.

The assault happened last January on an EasyJet flight from Manchester, U.K. to Iceland.

After consuming three alcoholic beverages, 51-year-old Capps stumbled up to the front of the cabin to demand another drink. He was told to go back to his  seat and wait for the in-flight service.

When the victim passed by with the trolley a few minutes later, Capps reached out to “take hold of his left buttock and squeeze with a lot of force,” prosecutor David Calder told the Minshull Street Crown Court this week.

“He could feel his fingers between his buttocks,” Calder described.

When the victim confronted Capps, Capps replied by shouting, “You are gay saying that I touched your bum!”

And when the victim accused him of sexual assault, Capps said, “You are not British if you think that is sexual assault!” Then he got up from the seat and went around the plane telling other passengers “The gay boy is getting me arrested for sexual harassment!”

At trial, the victim told the court he was “humiliated and embarrassed” by what happened, noting that several other people, including children, witnessed the assault.

Meanwhile, Capps’s lawyer, Rachel White, said that, after the attack, her client lost his job and home, but “I fully understand why the victim is so angry.”

“The defendant has struggled to accept that he behaved in this way,” White said.

She added that Capps has since “turned his life around.” He has secured new employment, gotten married, and is caring for his 25-year-old son, who suffers from depression.

Unfortunately, Judge Bernadette Baxter was unmoved by his tale of redemption. She told Capps he “drank too much” and “behaved appallingly,” then she noted his 105 (yes, 105) prior offenses.

“You have done exactly the same many times before,” she scolded. “This time you were on an aircraft. In this circumstance, the situation becomes a lot more serious.”

She continued, “You verbally abused [the flight attendant] in a homophobic way then sexually assaulted him by grabbing his bottom,” adding that the victim didn’t go to work to be “abused by people like you.”

Capps was sentenced to six months in prison. After his release, he will have to register as a sex offender for seven years.