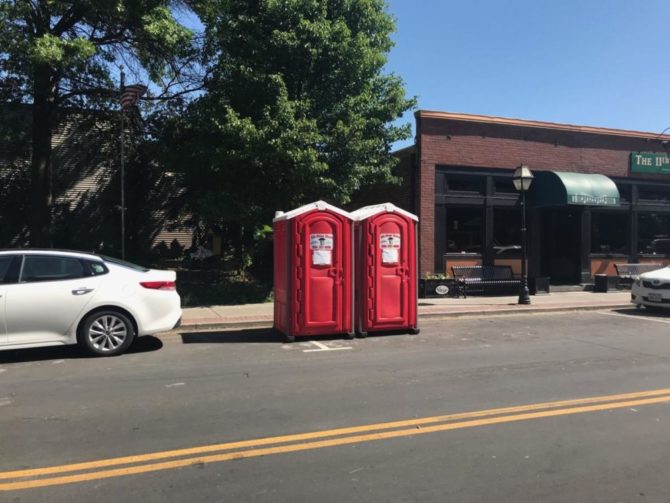 A local business owner from Iowa is accused of throwing a homophobic temper tantrum during his town’s Pride celebration.

It all started when two port-a-potties were placed near John Wisor’s restaurant during Pride Fest in East Davenport, Iowa last weekend.

That’s when at least half a dozen volunteers say Wisor, who owns a restaurant called 11th Street Precinct, flew into a rage. According to witnesses, he ran out onto the street and shouted antigay insults at them, including calling them “f*cking queers” and “f*ggots.”

Wisor, of course, denies everything and is accusing Pride organizers of being overly dramatic.

“This is typical, them ginning up stories,” he claims, adding, “I’ve been down that road, too; everyone’s got a witness!”

Wisor says he feels the placement of the port-a-potties was disrespectful.

“Everything stems from poor planning, execution, communication, and utter lack of respect!” he laments. “They put those urinals right outside my front door! Does it take a rocket scientist to see that it’ll stink and come into my business?”

But Quad-City Times reports that the two toilets were on the street but were not in front of Wisor’s business like he claims. Not only that, but they had signs posted on them that said, “Not for public use.”

Since Wisor’s alleged homophobic outburst, many on social media have vowed to boycott the 11th Street Precinct Bar and Grill.

Despite Wisor’s insults, Hootman says he and the other volunteers “stood our ground.”

“Like, we’re here, we’re not letting you win,” he says. “We had permission to be here, and we’re not going to roll over just because someone yells at us and calls us names.”

“[It’s] ice to know the community at large is very supportive here, and it makes me feel welcomed,” Hootman says.

Related: Gay bar owner’s racist history comes back to haunt him, but he would still like your business