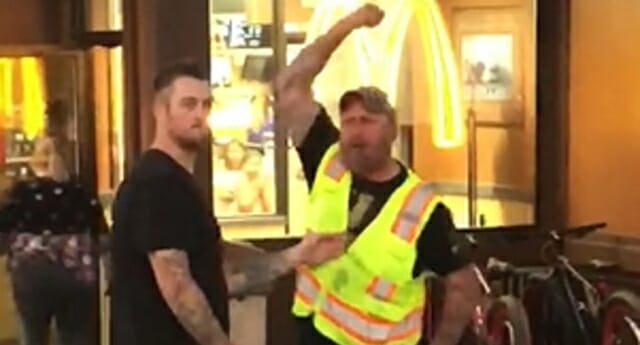 Another day, another racist homophobe caught on tape. This time it’s a construction worker from Idaho yelling at a group of a group of high schoolers eating ice cream.

52-year-old Richard Sovenski was arrested after verbally assaulting a group of teenagers outside of a fast food restaurant, calling the youths “f*cking little f*ggot,” “f*cking half-breeds” and “f*cking n*gger wannabes.”

The incident happened earlier this month in the parking lot of a McDonald’s in Coeur d’Alene, Idaho and was caught on video. The high schoolers, who were in Idaho for a field trip with their Spokane, Washington church, stopped in for ice cream after an evening prayer meeting.

It’s unclear what led to the outburst, but what happened next is truly deplorable.

“Get the f*ck gone, you f*cking idiots!” Sovenski is filmed shouting at the uncomfortable teenagers as try walking away from him. “F*cking morons! Get a f*cking job! F*cking morons!”

Things take a homophobic turn, when Sovenski says, “I will f*ck you up in a f*cking heartbeat, you f*cking little f*ggot!”

That’s when one of the girls in the group replies, shocked: “F*ggot?!”

The video ends with Sovenski violently rubbing his genitals while making a face at the youths.

Police were later called and Sovenski was arrested. He is charged with one count of misdemeanor battery and one count of felony malicious harassment, Idaho’s hate crime statute.

Sovenski is scheduled to appear in court in early September. Preliminary hearings are scheduled for July 27 and July 31.