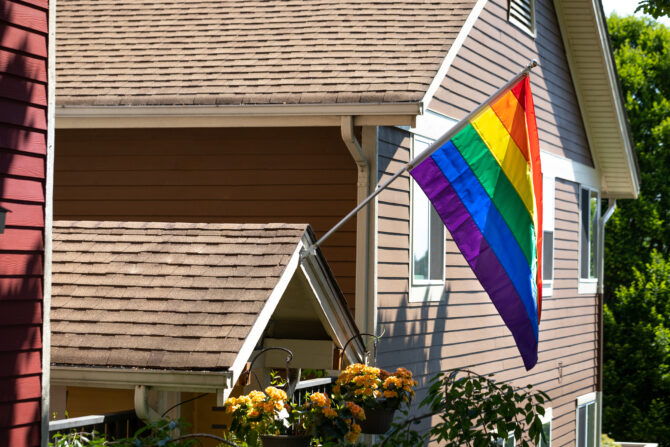 Imagine thinking you could tell a queer person how to decorate their home.

A Boise homeowner’s association really tried it this week, sending Quail Ridge resident Jordan Hall an order to remove a set of rainbow Pride lights from his home.

The order for removal cites the association’s repressive CC&Rs (covenants, conditions and restrictions), as well as calling the display a “noxious or undesirable act.”

This particular association doesn’t seem to be judging all light displays equally, however; one neighborhood home reportedly uses “thousands of LED lights” at Christmastime, while another has pure red lights and has never heard a peep out of the HOA against them.

Related: Community rallies around queer-friendly church after it gets defaced by homophobic vandals

This is far from the beginning of Hall’s striving for LGBTQ+ visibility. After six years of military service during the “Don’t Ask, Don’t Tell” era, this resident isn’t coming anywhere near the closet again.

He’s handed out Pride flags to his favorite establishments in the area, held Pride parties in his own backyard, and set up this Pride light display after being inspired by the White House’s own June display.

The HOA, whose president actually attended some of Hall’s Pride parties, won’t even acknowledge the display as being representative of Hall’s LGBTQ+ identity.

While he recognizes Idaho as a red state, the resident thinks one of the true conservative values should be the protection of freedom of speech and that being denied his freedom of expression in this instance is a slippery slope into being silenced on a larger scale.

The fear isn’t one without merit; Boise recently made headlines after a pastor there posted a YouTube video claiming “sodomites are reptilians” and demanding that the U.S. “put all queers to death.” It’s hard to imagine a harder push to silence a group of people than that.

Hall had initially planned to take the display down some time in July as Pride month had ended, but after the HOA’s protestations, he says they’re not going anywhere any time soon.

“They don’t intimidate me in that same regard … I feel bad for the person who can’t defend themselves,” Hall states. “This is not being conservative, this is being a homophobic bully.”

The association has called for a hearing in August to determine whether he violated the rules. Until then, Hall says the display stays up.