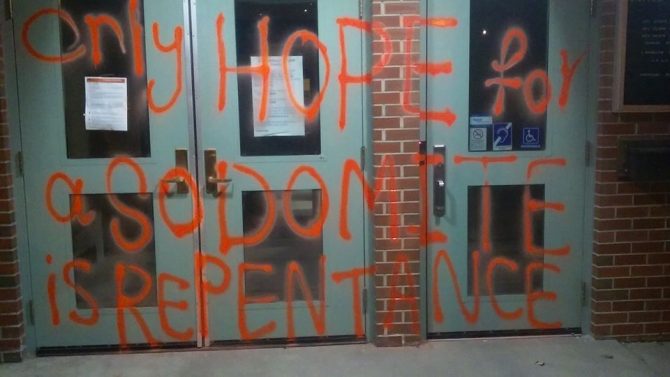 Three LGBTQ-friendly churches in Saskatchewan, Canada were recently targeted with antigay graffiti. Spray painted on each of their front doors was the same hateful message: “The only hope for a sodomite is repentance.”

After vandalizing the buildings last weekend, 36-year-old Amir Bozorgmehr, who is originally from Iran, posted photos of his alleged handiwork to Facebook.

On Saturday, Bozorgmehr was arrested and charged with eight counts of mischief in connection with the vandalism done to the churches, as well as additional vandalism done to a LGBTQ pride mural on a local college campus.

Police say they considered adding hate crime charges, but ultimately decided against it.

“Section 319 of the Criminal Code refers to incitement of hatred,” police spokesperson Alyson Edwards explains, “however, our investigators did not feel the offenses fit into that category.”

It’s unclear how or when Bozorgmehr entered the country, but prosecutors say they are seeking to have him deported back to Iran.

“Immigration authorities have advised Public Prosecutions that enforcement processes have been completed for this individual and there is a removal order in place that can be enforced,” prosecutor Dan Dahl says.

“Because there are no diplomatic relations with Iran, a passport at this time cannot be obtained, as this individual has no identification,” Dahl explains.

Meanwhile, a team of volunteers have already helped the churches clean off the graffiti.

“It just really shows us how much work needs to be done in terms of LGBT+ acceptance, especially in religion,” says Lia Storey-Gamble, a member of Grosvenor Park United Church, which earlier this year led an effort to get conversion therapy banned in the city.

“We are an activist church. We believe in working hard on these issues,” she continues. “This instance shows us how much more work needs to be done.”

“Our church is more accepting than ever. Our love is still strong and we’re ready to do that needed work.”