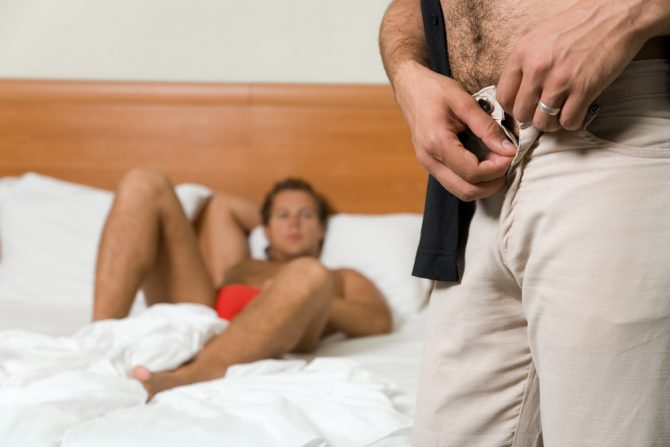 Navin Noronha has a thing for married men. Or maybe it’s that they have a thing for him. It’s unclear. But he’s hooked up with quite a few over the years, and he writes all about it in a new essay titled “Everything I’ve Learnt From Sleeping With Married Men as a Gay Man” published by Vice.

“Many gay men I know, including myself, have gotten their hearts broken at the hands of men married to women,” Noronha writes, “with many swearing off this category altogether after having their hopes dashed over and over.”

He goes on to talk about the first time he hooked up with with a married dude, who he didn’t know was married prior to their getting naked together. Noronha was 19 at the time.

“I was rather bewildered when I found out,” he says, “but also intrigued.”

“This man has a wife, and together, they have a kid. Why dip your beak outside then? Well, as he tried to rationalize it, ‘Men across the spectrum cheat. So does it matter if it’s a man or a woman you’re sleeping with?’ I was willing to give him the benefit of the doubt but he continued, ‘See, buddy, after childbirth, a woman’s vagina isn’t firm enough for a lot of guys. That is why men like me go for other men.'”

Noronha recalls other married men he’s had sex with over the years, including one who told him afterwards, “I have a son your age. You should meet him some time” thus “taking my calling him ‘Daddy’ to a meta level.”

“One other dude didn’t even tell me he has a wife,” he recalls. “But thanks to the wonders of Truecaller and Facebook, I could track him down and see his wife plastered in all the display pictures. My heart sank because he texted me the next day, ‘I want us to be more.’ Well, three is ‘more’ than two if you think about it.”

Noronha adds that he’s “always felt bad for the wives” because “they usually have no idea that their partner is on dating apps, looking to have sex with other men.” But as he gets older, he’s starting to feel sorry for the guys, too.

“The more I talk to them, the more I’ve come to realize that my initial disgust towards them has turned into empathy,” he writes. “I have no idea how they live their entire lifetimes in duality. If nothing else, they have superb self-control.”

In the essay, Noronha pontificates over just who’s to blame for all these suspicious married bisexual men afraid to live out their truths?

“Who is really to blame here?” he asks. “The men for succumbing to societal pressures and not daring to come out, irrespective of whether they happen to be gay or bi? Or is the LGBTQ+ community at fault for not being more accepting of other narratives and shaming married men?”

We can’t help but wonder how gay men who find these guys on dating apps, earn their trust, and then tell the whole internet about them afterwards might also factor into the equation.

Related: When turning 30 means you’re into guys *and* their dads