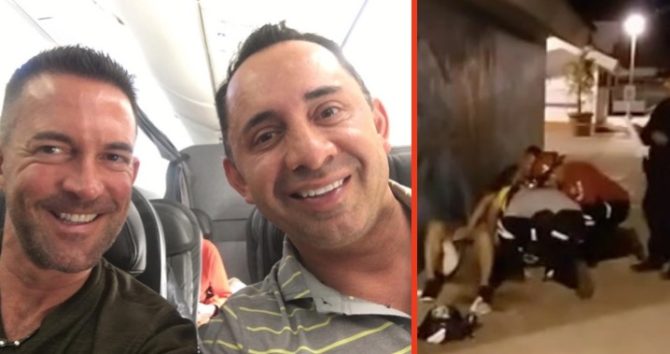 A gay couple was walking through a park early in the morning in Puerto Vallarta, Mexico, when they say a stranger pulled out a gun and shot at them, hitting one man.

Carl Blea is a Palm Springs real estate agent who was vacationing with his husband, Marc Lange, in the city known for its bustling LGBTQ scene.

Around 2:30 am after a night out, Blea and Lange were walking through a public park holding hands when they say a man yelled something at them.

Blea saw the man reach for a gun and the couple ran, but the man fired and Blea was struck in the back of the leg.

Lange and Blea believe they were targeted for being gay.

In an emotional Facebook post, Lange says “we were involved in nothing more than a hate crime,” adding that it was “a random act of hatred.”

They’re speaking out because they feel authorities are attempting to keep the attack quiet so as not to negatively affect tourism.

The Desert Sun reports that the local news mentions a robbery attempt and an altercation between the gunman and the couple that preceded the shooting.

Lange says both points are false.

“We never uttered a word to (the gunman),” he said.

“This was not a robbery went bad. It was a hate crime as Carl Blea and I were walking hand in hand. We never spoke to the man who shot us. He yelled at us and then pulled out a gun and shot at us. This is not correct. We told 3 different set of police officials the same story. There were no witnesses, the street was empty.”

This video was taken just after the shooting when Blea was receiving care from paramedics:

I post this only because there has been no local press or alerts made to the puerto Vallarta area.

Last night we were involved in nothing more than a hate crime.

Last night my husband and I were walking home hand in hand from an evening out in puerto Vallarta. As we cross the street walking into a well lite area, Cardenas Lazaro park, we pass a white car and a person who looked like he had done hard time in prison, wife beater and tattoos both face and body (circle tattoo on right side of face). As we walk pass him he shouts something. I turn to look and then turn away, Carl Blea looks and see this person pull out a gun which is now pointed at us. Carl begins to run and pulls me away from the shooter. A bullet is shot and Carl goes down. Shot. We have no idea what is happening. A concrete building separates us from the shooter. I scream for help….. someone finally helps, police arrive, 45 min later the ambulance arrives.

This person was there for no other reason than to kill innocent people. We happened to be his target. There is nothing in the local newspaper or news warning people of this incident. Please share with anyone who is there.

I post this only because there has been no local press or alerts made to the puerto Vallarta area. Last night we were…

Update: A statement put out by the Puerto Vallarta Tourism Board and emailed to Queerty reads in part:

“We stand in solidarity with the members of our local LGBT community and condemn any acts of crime. As a community, we take all incidents involving visitors very seriously and we have all been taken by surprise by this incident as it is not normal in Puerto Vallarta, said Javier Aranda, Director of the Puerto Vallarta Tourism Board. “We, along with the police, and authorities across local, state and federal government have been monitoring this situation and have been in direct contact with the LGBT associations and leaders of the destination.”

Puerto Vallarta remains one of the safest destinations for the LGBTQ visitor, not only in Mexico, but on an international level. These types of incidents are rare and extremely isolated. Last year, more than 17,000 LGBTQ international visitors came to Puerto Vallarta for Vallarta Pride alone, without incident. It is estimated that, in general, about 20% of visitors to Puerto Vallarta, specifically in the city’s Romantic Zone, are part of the LGBTQ community and safely enjoy the destination, again without any incident.

Puerto Vallarta is a welcoming and friendly city.”