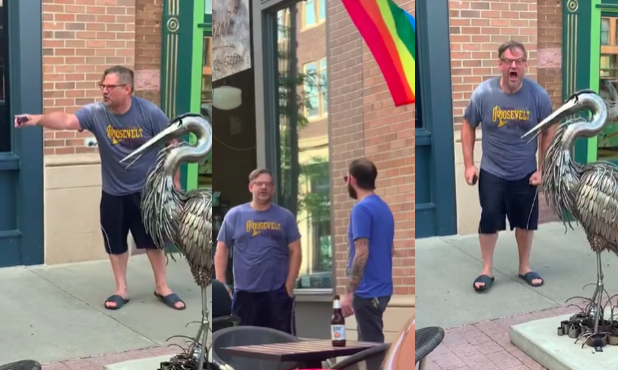 Sioux Falls, South Dakota. A toxic white male suffered a major meltdown in the middle of the street after someone threw water on him when he allegedly shouted homophobic and racist slurs at them.

Video shows the unnamed man, soaking wet and red in the face, yelling outside of what appears to be a gay bar in downtown Sioux Falls in the middle of the day. It’s unclear what led up to the outburst or who doused him in water, but it clearly set him off.

According to witness Andrea Lynn, who uploaded the video to Facebook this week, “Sorry for the horrible language but this happening in Sioux Falls right now. Driving by calling everyone outside fa****s and n*****s. Got a bucket of water thrown on him and said he was assaulted. Let’s do better SF.”

The man proceeds to call the people outside the bar “disgusting,” a “mob,” “fascists,” and “assholes,” among other insults. He also repeatedly accuses them of being “violent” when they are literally just sitting calmly at their tables.

“What violence are we doing?” a woman politely asks. To which to man responds by shrieking, “You’ve been SO VIOLENT!”

Eventually, he calls 911 (of course!) to report that he is being “assaulted.”

Sorry for the horrible language but this happening in Sioux Falls right now. Driving by calling everyone outside fa****s and n*****s. Got a bucket of water thrown on him and said he was assaulted. Let’s do better SF.

Police arrived at the scene shortly thereafter, but they did not arrest the man, citing “free speech.”

Clemens said the man was likely trying to incite a reaction from people, but said it’s best to ignore people who make comments like that or report it to police. “There’s probably not a whole lot of things we can do in a situation like that, but sometimes having officers come and talk to people is enough to maybe persuade them to go somewhere else,” Clemens said. Police did not release the man’s name because he was not arrested. Officers have come into contact with the man before about similar issues, Clemens said.

So far, the video, uploaded Monday, has received over 80K views, over 700 shares, and nearly 600 comments.

Related: After parking illegally, Karen unleashes on “punks” who “go on Grindr and do hookups”