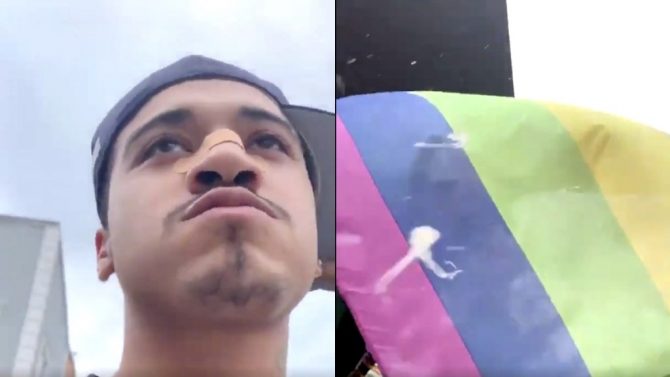 The man, identified on Facebook as “Kha Dafi,” uploaded a video of himself spitting on the flag to his YouTube account, where the owner of the Albatross spotted it.

Along with the video, the offender included the caption, “stupid kid spit on LGBTQ flag and get chased by transgenders,” though nobody actually chases him in the video.

“The owner of Albatross Bar, located at 36-19 24th Ave., said he received a copy of the video via e-mail Monday night, shortly after it was posted to YouTube,” reports The Astoria Post.

“He said he initially thought to ignore it, but after thinking on it, he decided to post it to try to find the suspect. The user’s channel doesn’t use a real name and its other videos are of self-created rap songs.”

If anyone recognizes this person please private message us so we can report to authorities. We won’t tolerate this unacceptable behavior. ?? pic.twitter.com/Bef35cwnpw

The owner of the Albatross, who prefers to remain anonymous, has re-ploaded the video to all of the bar’s social media platforms in hopes that somebody will recognize and name the offender.

“We decided to download it ourselves and put it on our own platforms, so no one would be giving him any attention but we could still get it out there and hopefully find his face,” he says.

“You can’t just lie down to these things, you need to stand up and say they’re not right.”