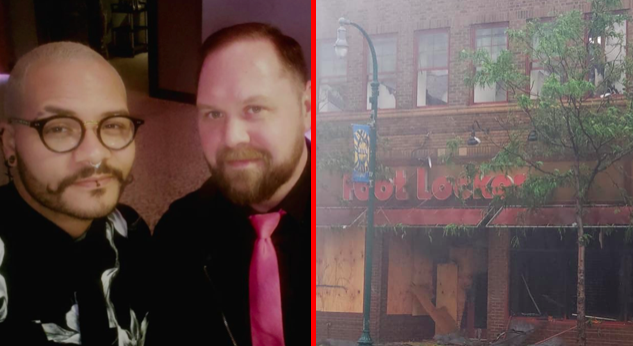 “I don’t know who is doing all of the damage, but it breaks my heart to think of all the people who are suffering,” Jacob Becher tells Queerty.

37-year-old Becher and his partner of six years, 33-year-old Alexander Passenheim, live in Minneapolis, where riots broke out last week after George Floyd was murdered by local law enforcement on Monday, May 25.

What began as a peaceful, non-violent protest quickly descended into chaos. Much of the activity was concentrated on Lake Street, a busy thoroughfare near the area where Floyd was killed.

The couple, who was living in an apartment above a Foot Locker store with their two cats, had their home stormed by intruders. They first tried breaking into the building. When residents fought them off, the intruders set the building ablaze, with people and animals upstairs on the second floor.

Queerty had an opportunity to talk with Jacob about the experience and what he and Alexander are doing now that their home has been destroyed. Here’s what he had to say…

First, are you and your pets safe? Did you suffer any physical injuries?

Thank you so much for asking about our pets. Our two little boys are like our children. Thankfully we were able to get them out of the apartment safely. During the initial looting on Wednesday night [my partner] Alex did suffer minor injuries. At one point looters attempted to break into our apartment building. Alex, [our neighbor] Brenda, and a friend forcefully pushed them back and had to tie the doors shut with extension cords.

Alex and Brenda pleaded with them to stop, yelling, “We live here! Please stop the fires!” Looters continued to attack them, screaming, “Burn it to the ground!” Fearing for their safety, they were forced to return to the apartment to grab what we could before fleeing. They suffered minor cuts and bruises and smoke inhalation.

When did your building burn down and where were you when it happened?

Our building was lit on fire three separate days. On the morning of Friday, May 29, looters started the Foot Locker on fire. The fire itself caused severe structural, water and smoke damage. As a result we were unable to go back into the building to claim any of our personal belongings. Because we were unable to return, we went to a hotel for the evening hopeful we would be able to go back in after the chaos to claim a few items. To our shock and dismay looters returned for a second and third time and lit the other side of the building on fire, leaving nothing but brick, metal, and ash.

After three days of fires there is nothing that is salvageable. The roof, walls, and all belongings have been destroyed. What is left of the building is uninhabitable.

Wow… I woke up to go back to the apt to see what I could salvage and they set a fire for the 3rd time and finished off the building. Everything this is gone. My photos, sentiments, everything ash… wow.

Where are you staying now? Do you know where you’re going to go after this?

With the help and support of the community and Red Cross we are currently staying in a hotel outside of the city. We are trying desperately to find a home that will be a safe space for us and our fur babies. Our future is uncertain at this point. One thing we are certain of is that we are both safe and healthy and will get through this traumatic event in our lives together.

What is the general feeling in Minneapolis right now, particularly in the queer community? How are people processing this?

I watched in horror as our city was looted and burnt. I watched the outrage and anger that many of the protesters were showing as a result of the injustice in our system. I have seen the pain and sadness as people gathers to show their love and loss at memorials for George Floyd. But above all I have seen the healing that has already begun to happen.

Every single morning after the destruction, I saw my neighborhood come together to clean the streets. Volunteers came out from all around the metro to sweep up the broken glass, build beautiful memorials and move forward from the tragedies of the night before.

I personally am feeling a full range of emotions about everything that is happening in our community. I would like to say that the queer community has showed Alex and I such love and support, which we are eternally grateful for. We love our queer community in Minneapolis and I believe we will become stronger after the storm.

Numerous media outlets have now reported that many of those rioting were not people protesting George Floyd’s murder but were outside agitators and white supremacists looking to stir up more trouble and potentially incite race wars. What was your response to first learning this?

Honestly, this is a difficult question to answer. All that I can say is that I know this community. I know this city. I know that I love my partner, who is a queer, Black man. And I know that, at the end of the day, Minneapolis is a city full of love and care for their fellow neighbors.

I don’t know who is doing all of the damage, but it breaks my heart to think of all the people who are suffering. Everyone from the family and loved ones of George Floyd and all who have been wrongly prosecuted at the hands of authority. I know that we need to come together at this point and show more than ever that we care about our communities–Black, white, queer, whatever you may identify as. At the end of the day, we are all human and deserve to be treated with love and respect.

What can people outside of Minneapolis do to help?

We need to stay focused on where this all started. Our system is broken and it has been for a long time. I would ask for us as a queer community to remember the similarities we have faced at the hand of ignorance and homophobia. I would ask that you take action. Things will not change until we come together and make a change. Think about your interactions with people in your communities. Are they based on fear or compassion? It is going to take love, patience, compassion, and financial stability for people and businesses to get back on their feet.