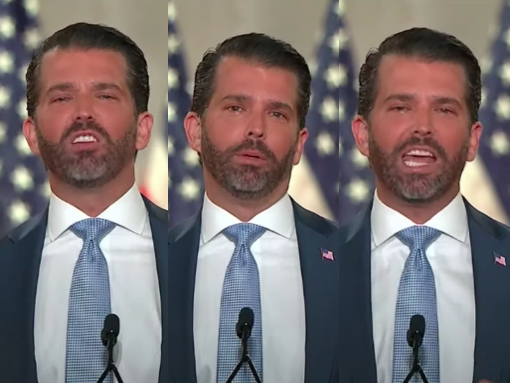 Was Don Jr. coked out of his mind during last night’s 2020 Republican National Convention? That’s what everyone wants to know.

In his glossy-eyed, 10-minute speech yesterday evening, during which he frequently slurred his words, the president’s eldest son bemoaned political correctness, railed against the “radical left,” called peaceful protestors looters and anarchists, and declared Joe Biden “basically the Loch Ness monster of the swamp.”

“Unlike Joe Biden and the radical left Democrats, our party is open to everyone,” he declared. Then he immediately contracted himself by saying, “It starts by rejecting radicals who want to drag us into the dark.”

Not long after Junior finished speaking, the word “coked” began trending on Twitter. It seems audiences were less interested in the content of his pre-taped speech and more curious about the drugs he’d taken before stepping up to the podium.

My mom is a substance abuse counselor and just text me that Don Jr is high on coke.

I saw #cocaine was trending and I watched the Carrot Jr’s speech. Now, I’ve taken my fair share of cocaine, some might say unfair, so I know intimately from whence I speak. That dude was coked out of his fucking gourd. Think I’m wrong? Just count the blinks…

I’m surprised the DEA didn’t arrest him immediately after that coked up train smash.

Obviously not watching the RNC, but from my feed it sounds like Don Jr snorted coke off Matt Gaetz’s ass? Am I close?

In fairness, this is the longest I have been able to watch without changing the channel.

What’s wrong with @DonaldJTrumpJr ‘s eyes?? He’s either high or on the verge of crying. Also, didn’t he criticize Joe Biden for reading off a teleprompter? What the heck is he doing right now? 🤣🤣🤣 #RNCConvention2020

Absolutely howling with laughter over Don Jr’s coke eyes. Like holy shit, my guy, did you need to do THAT much blow tonight?

“Many people” are saying Junior was coked up when he gave his taped speech for his daddy at the RNC.

When you look in Don Jr’s eyes, you can see his drug dealer starin’ back at you.

If Donald Trump Jr. is as high as everyone in America thinks he is right now….he is gonna FREAK when he sees what’s trending #1 on Twitter right now 😬

Now, how about some memes?