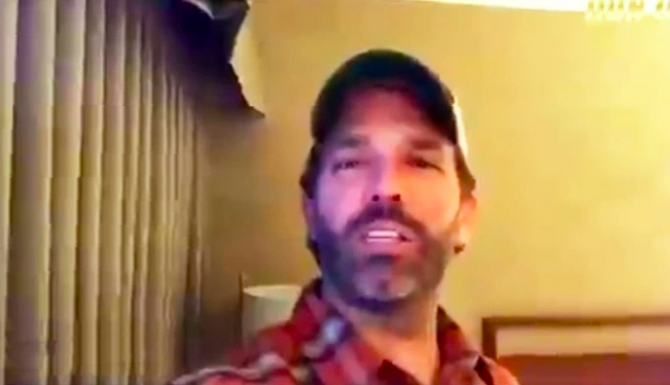 A truly, truly bizarre cellphone video of Donald Trump Jr. went viral over the weekend and when you see the tape you’ll understand why.

The video looks as though it was shot inside a budget motel room. In it, Don Jr. appears glossy-eyed as he slurs his words in a barely coherent tirade against Hunter Biden.

Sounds a bit like a bender. I mean, I’ve heard… pic.twitter.com/0pB5oVjJ12

Many people believe the video was filmed at a Motel 6 and that Don Jr. was coked out his mind. Queerty cannot independently verify whether these rumors are true.

Others claim the video is fake.

Junior, who tested positive for coronavirus last month, hasn’t commented on it, but after it went viral, Motel 6, bless its heart, was trending on Twitter under the “Politics” category.

Here’s what people have been saying about the whole thing…

Motel 6 is trending because @DonaldJTrumpJr is a coke-head.

Maybe Don Jr is at at the Motel 6 waiting on Rudy’s next press conference?

He’s fucking drugged out of his pea-sized brain.

This is right up there with a drunk shirtless David Hasselhoff lying on a floor eating a burger.#motel6
Motel 6 pic.twitter.com/wuz9UvaoZO

if i were don jr i would definitely be on the lam in a motel 6 doing drugs.

The video of Trump Jr. in Motel 6 with his tongue melting, while he’s trying not to talk through the nose and still talking through it, is the entire dysfunctional Trump universe squeezed into one human face

Trump: “Did you see what Sasha Obama posted today?”

Has anyone figured out why DonJr was in a Motel 6 snorting mountains of blow? Is he already on the run?