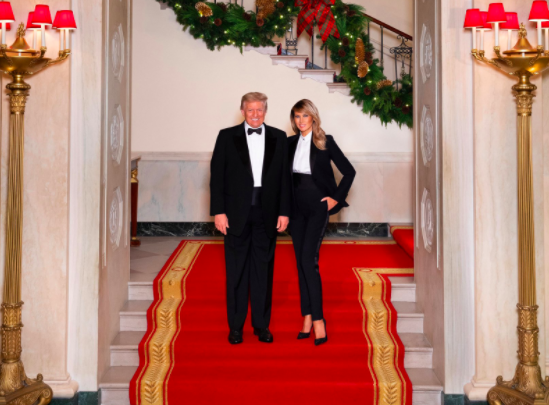 Melania Trump shared she and her husband’s official 2020 Christmas portrait last week. It shows the couple dressed in matching tuxedos standing near the landing of the White House’s grand staircase.

The portrait appears to have been photoshopped. At least, according to many people on Twitter.

Not long after Melania, who hates Christmas, shared the holiday pic, internet sleuths began alleging that Donald Trump didn’t actually pose for it. Instead, they believe he may have been lifted out of a different photo with Prince Charles and then inserted into the one with Melania, who either posed alone or was also photoshopped in using a different picture.

The evidence is certainly compelling…

What a lovely photo (shop). Was Donald lifted out of a photo from this same meeting? pic.twitter.com/kvzgSMtxe7

This looks like they were photoshopped together… Why isn’t he looking at the camera… pic.twitter.com/SsHrFobf2G

Every photo has been staged, costs a fortune. Photo ops. Never candid insights into real life. No family dinners. No family watching anything together. No dog. No cat. No warmth. No empathy. We were the jury. #TrumpIsANationalSecurityThreat

the shadows on the wall when they are 4 m from the wall!
the trimming of the hair !!! pic.twitter.com/WYcbP29g6q

The idea that Donald and Melania might not have posed together for their official Christmas photo isn’t all that surprising, however. At least, not to anyone who’s been paying close attention to the first family in recent weeks.

In addition to that whole #FakeMelania conspiracy theory, last month it was revealed that Melania didn’t celebrate Thanksgiving with her husband and his grown children. She and Barron weren’t shown in a candid family photo taken at Camp David, and her office wouldn’t say where she spent the holiday when asked for comment.