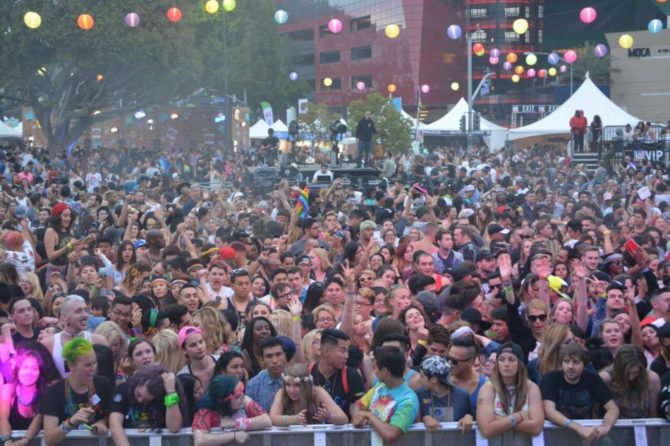 Hundreds and hundreds of people were turned away from West Hollywood’s Pride Festival on Saturday night.

Around 10 PM on Saturday night, the fire marshall alerted LA Pride officials that the festival was way over capacity. This prompted the West Hollywood’s Sheriff’s department to go around asking people still standing in line to leave.

There was just one problem: Many of those people had already purchased tickets. Organizers had oversold the event.

There were reports of several people throwing rocks and cursing officers, but no reports of anyone being hurt. 200 people attempted to push their way back in while others were angrily demanding their money back.

According to some Pride attendees, the police reaction was a little, shall we say, extreme, with officers reportedly wearing riot gear.

“What were they expecting, Stonewall?” said Jerwyn Morton, who traveled from New York to attend LA Pride. “I have never seen so many cops in my life wearing riot gear at a gay event.”

Meanwhile, NBC Los Angeles reported disturbances at the will call window as well as on the street, resulting in at least one officer being assaulted.

Chaos reigned inside the party, as well.

Journalist Garrick Kennedy tweeted updates from the event including some complaints headliner Kehlani voiced from the stage about the sound system. According to Kennedy, the driving force behind the surge in ticket sales was Kehlani’s fans who tripled attendance from last year.

Despite the kerfuffle, 40,000 people still managed to make it into Saturday night’s LA Pride party, and they had a great time.

44-year-old Christopher Johnson told the Los Angeles Blade on Saturday: “I went this evening because I wanted to simply stroll around the festival, but the line of early 20-something people was 20 people deep for several blocks.”

“I’m glad it’s successful but I’m not welcome. There’s nothing there for me anymore and it makes me feel old.”

Meanwhile, 22-year-old Lauren Drake, who was unable to get into the festival, tried to look on the bright side.

LA Pride has promised full refunds to ticket holders who were was unable to get into the event.

Scroll down for pics from the weekend’s festivities…

Successful, happy, fun and safe #LApride!!!! So great to see so many of you today!!!! Always be proud of who you are because the person that you are is #BEAUTIFUL!!!! #losangeles #Pride #wehopride #weho #california #gym #fitness #fitfam #happy #denim #hollywood #presenter #fun #chipotle #friends #god #positivity #positivevibes

Thanks Christina Aguilera for stopping by and supporting #LAPride! You are fabulous. We love you!! Love the new remix of #accelerate! #JUSTBE #Pride2018

LA Pride was everything and more! Feels good to be back! #swipeleft

Post 2/3 (SWIPE ?) Everybody at pride was looking like some good ass skittles and m&ms lmao #lapride2018 #pride #pridemonth #pridefest #lapride