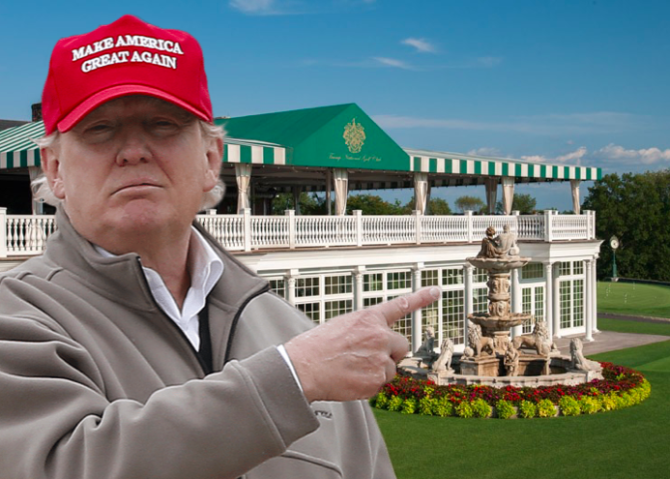 As Mar-a-Lago (a.k.a. the “Winter White House”) prepares to close for the summer season, Donald Trump is contemplating where he’ll spend the next four to six months since, evidently, the White House isn’t an option.

Politico reports that Mr. Trump has his sights set on the Trump National Golf Club in Bedminster, New Jersey.

The private club, located just 40 minutes from Manhattan, sits on 600 acres and bills itself as “one of the most prestigious golf properties in the world” with some of the “finest amenities.” Think of it as Mar-a-Lago’s sexy summer counterpart. (Hopefully it has better food.)

Related: The food at Mar-a-Lago may make you violently ill, according to shocking health inspection reports

Local residents are already wringing their hands over the thought of Trump and his motorcade constantly traveling in and out of town at their expense.

“We’re kind of apprehensive, I guess you could say,” Nick Strakhov, a longtime resident of the area, says. “It’s nice to be recognized. But on the other hand, if it gets to be tedious, we might start to complain.”

“West Palm Beach is a lot bigger than we are,” resident Jane Schumann adds. “Those people are a little more affluent than we are. Has there been any thought to that?”

But it’s not just area locals and angry Democrats who wish Donald would stop wasting taxpayer dollars on weekend getaways. Republicans are starting to get fed up with it, as well.

“I do wish that he would spend more time in Washington, D.C.” Sen. Joni Ernst said at an event in Iowa this week. “That’s what we have the White House for.”

She added that Trump’s bi-weekly jaunts to Florida, which cost taxpayers between $1 and $3 million per trip, have “been bothering not just me, but some other members of our caucus.” Ernst said she plans to talk to Trump about it very soon.

Nobody actually expects Trump to listen, however. Not only because he doesn’t listen to anyone, but because he really, really likes Bedminster. He goes there every summer. It’s also where Ivanka was married. And he was even planning on being buried there after he died. That is, until local officials denied his request to construct a massive 19-foot-tall stone mausoleum in the middle of his golf course.

Still, locals are putting up a fight. They’ve held at least one community meeting over the matter and have discussed possibly staging protests, if needed.

“We’ll do what we need to make our opinions known,” resident Paula Dolan, chair of the Bedminster Democratic Committee, says.

Unfortunately, their efforts will likely be in vain. Last month, the town land use board approved construction for a 500-square-foot, two-story balcony and porch addition to the property that will be exclusively reserved for the president.

Get ready, Bedminster, The Donald’s coming whether you like it or not. And get ready, taxpayers, because you’ll be footing the bill!

Related: Donald and Melania fly in separate “his and hers” taxpayer-funded planes