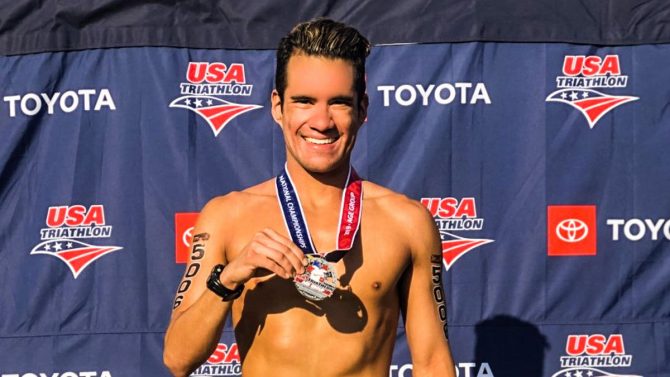 Minnesota native Matthew Helmerichs is opening up about his difficulty in coming out of the closet. But in a surprising twist, he also reveals what helped him do so: triathlons.

In a new essay for OutSports, professional marking executive Helmerichs recalls memories of growing up in a homophobic society, and how that upbringing made him afraid to come out as an adult.

“Around the age of 16, every now and then I would get asked a question that always caught me off guard. ‘Are you gay?'” the 25-year-old writes.

“Sometimes it was from a curious close friend or from someone trying to embarrass or make fun of me. Deep down I think I knew I was gay but I wasn’t ready to explore or embrace that part of myself. During high school I was just trying to figure out how to pass chemistry and whom to sit with at lunch.”

Head in the clouds

“I decided to keep being gay a secret,” he admits. “Attending a small high school limited my exposure to anything relating to the LGBT community.”

Helmerichs goes on to recall how hearing gay jokes from peers and a denunciation of gay relationships by a theology professor kept him closeted until his sophomore year of college.

Around the same time, he began showing an interest in triathlons. Training for the contests brought him focus, and helped him maintain mental health.

“Triathlon kept me sane throughout my coming out process,” he says. “Whenever I got lost in my head with a million questions I went and trained. Swimming, biking, running and lifting took away the anxiety caused by being in the closet.”

“As a competitive athlete, I don’t let anything distract me when I’m training, I turn off the thoughts in my head and focus on performing my best. This ability to turn off my thoughts while training and racing allowed me to take a break from the thought of coming out.”

Ultimately, Helmerichs decided to come out to a few close friends and have a few clandestine dates. Eventually, he came out to his parents and posted a coming-out message on Facebook to his friends.

By finally coming out to the world, he knew he’d won the race of a lifetime.

Day 1 of nationals was a disaster due to some choppy waters on the swim. I managed to finish with my 3rd fastest run time. Despite this I walked away feeling defeated. Day 2 I took a deep breath and told myself today’s an opportunity to be better. I redeemed myself and came back stronger with my 2nd fastest bike and run times! When it’s all said and done I gave my all and had a good time doing what I love ? #USATAGNC

“In the moments after coming out to my parents I realized I was free,” he recalls. “I was done fighting with myself and had discovered who I was. I felt weightless. All the years of questions and thoughts in my head were gone.”

Now happy, healthy, out and proud, Helmerichs has a message for the world.

“You are enough,” he says. “Never let fear or anyone take that away from you or make you think otherwise.”

Scroll down for more pics from Helmerichs’ Instragram page…

Closed the Triathlon season with a 2nd place finish ?It was a wet and wild race today with nonstop rain! Going into this season I told myself no BS or shortcuts. For me this meant doing the things I didn’t wanna do. I was brutally honest with myself when it came to the effort I was putting in. When there were moments I was tired or feeling off, I’d say you gotta push harder if you wanna get better. 6 races later, I’m proud of myself for the growth I’ve made and feeling more confident in my skills ? ?: @lgead

Get lost in the right direction ?: @will.mn

Life is only as good as your mindset ?

A 2nd place finish with a course PR at today’s race ?? Felt great putting all the winter training to use. Ready to get after the rest of the season. Next stop, New York City National Championships!