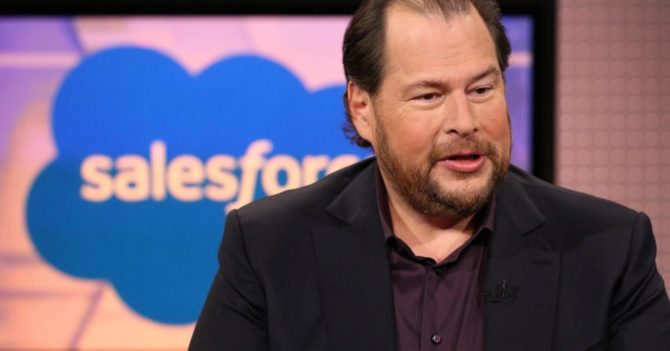 Who He Is: Founder & CEO of Salesforce, the cloud computing company that generated $8.3 billion in revenue last year alone.

Why He Matters: In 2015, Benioff announced he would withdraw all Salesforce business from the state of Indiana if a bill allowing businesses to discriminate against LGBTQ patrons became law. Then-governor Mike Pence signed the bill only after allowing a provision that blocked businesses from turning away people on the basis of gender identity or sexual orientation, in essence robbing the law of its original intent.

Salesforce Women’s Network and our CEO, Marc Benioff, stood for gender equality at the San Francisco Women’s March this past weekend.

Why We’re Proud: As Bette Midler once sang, “you gotta have friends”–especially in high places.

Benioff has stuck some powerful blows for equality. Besides taking on Indiana & Mike Pence’s characteristic bigotry, Benioff took similar action in Georgia after the passage of a so-called “religious freedom bill.” (Governor Nathan Deal vetoed the bill.) Benioff organized a group of 70 other elite CEO to double down on his commitment:  That group included the likes of Reed Hastings of Netflix, Satya Nadella of Microsoft and Dan Schulman of PayPal. In a bleak political landscapre, Benioff and his ilk are one of the few bright spots.

Today we are canceling all programs that require our customers/employees to travel to Indiana to face discrimination. http://t.co/SvTwyCHxvE

In 2016, Benioff issued a policy to promote equal pay for equal work policy across Salesforce to combat gender inequality. This year, he personally donated $1 million of his personal fortune to the March For Our Lives fund aimed at ending gun violence in schools.

Of his corporate activism, Benioff has said that he is standing up for his employees and customers, not just investors:

CEOs are very much the advocates of their customers and employees, as well as of the environment and local communities. The most successful CEOs today are advocates for their stakeholders, not just their shareholders.