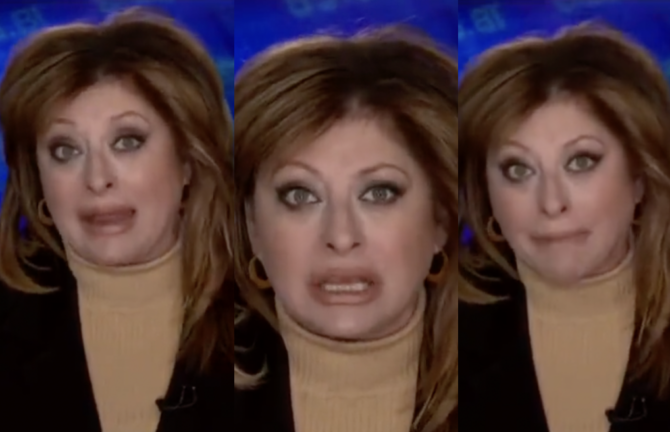 Fox News nutjob Maria Bartiromo went completely go off the rails on Sunday Morning Futures yesterday in a bizarre segment about the humanitarian crisis in Ukraine, during which she ranted and raved about how President Biden secretly wants to see Ukraine “taken down” so he and Vladimir Putin can “sell out” the country together. Or something.

Bartiromo, looking hungover and in dire need of a hairstylist, alleged that “some people” have told her Biden considers Putin a “partner” rather than an enemy.

Fox's Maria Bartiromo: "Some people have told me over the weekend that they feel that, at the end of the day, this administration does not see Putin as the enemy, they see him as a partner!" pic.twitter.com/lkYddMlXUs

Later in the hour, Bartiromo invited Lindsey Graham, who recently called for Putin to be assassinated, onto the show to bolster her outrageous and unfounded claims that Biden is secretly in cahoots with the Russians.

“The Biden administration looks at Putin as a partner for climate change and an Iran Deal maker rather than a war criminal,” Graham declared. “Biden is more afraid of Putin losing than he is excited about Ukraine winning. Let you hear it from me. Victory for Ukraine!”

Bartiromo then asked if the United States and its NATO allies should do more “without turning this into World War III.” To which Graham replied by saying that concerns of a potential world war are being exaggerated.

“This is all a bluff,” he said. “Putin knows it. No one wins a nuclear exchange. I am calling for the crushing of the Russian economy. Even though our war and fight is not with the Russian people, it is with Putin.”

Then he doubled down on his calls for the Russian leader to be assassinated, adding that “the only way this war ends is with Putin going to jail or being taken out by his own people.”

Neither Bartiromo nor Graham mentioned how Trump has been incapable of criticizing Putin throughout this whole ordeal, or how the ex-president was impeached (the first time) for threatening to withhold military aid to Ukraine unless it gave him dirt on Biden prior to the 2020 election.

Throughout the crisis, Bartiromo’s commentary on Ukraine has been pretty wacky. She has repeatedly accused the Biden administration of fabricating the threat of war in an attempt to protect Hillary Clinton.

Many years ago I was a guest on one of @MariaBartiromo shows to promote 1 of my books. Don't remember which one.

That Maria was smart, funny, articulate and SANE.

No resemblance to the invasion of the body snatchers Maria that exist on Fox today.

It's disturbing to see.

Fox's Maria Bartiromo is referencing "some people". She just forgets to say that she found "some people" at the bottom of a bottle of whiskey.

Is Maria Bartiromo a Russian asset?

Some people have told me that they feel that Maria Bartiromo is an idiot. https://t.co/bquWRUKjMD

Maria Bartiromo is like your drunken racist aunt who you only see at weddings & funerals & you try really hard to avoid her but she finds you anyway & grabs your arm then talks really loudly in your face as she slurs her words & flecks of vodka laced spittle land on your cheeks.

If Maria Bartiromo is concerned about who’s seeing Putin as a partner she should be calling out Tucker Carlson and Trump.

Maria Bartiromo went from respected finance reporter to full-blown Trumper. Having so much hate in your heart changes you.

Alcoholism is sick and tired of being associated with Maria Bartiromo.

Fox News host Maria Bartiromo suggested Biden wants Putin to win in Ukraine and saw him as a “partner.”

No Maria. Get it right, it was your deadbeat fake president loser Russian asset who allowed Putin to walk over America, not President Biden.

The Boozer & The Loser pic.twitter.com/3sqH739ED2