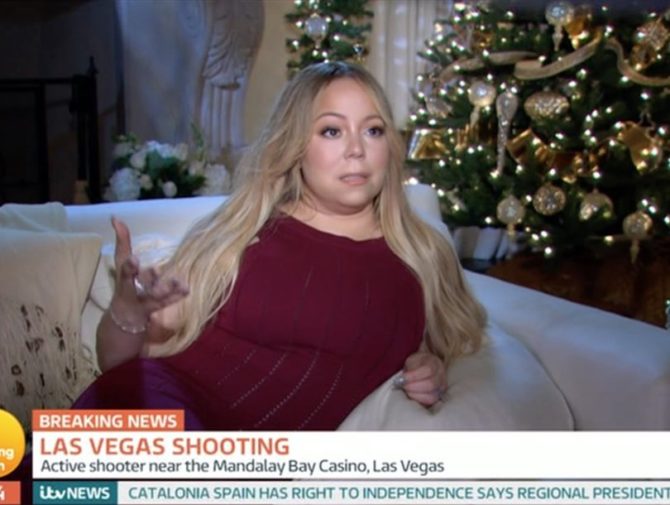 People are not happy with Piers Morgan for putting Mariah Carey on the spot about the horrific shootings in Las Vegas during yesterday’s taping of Good Morning Britain.

In case you missed it… Carey was scheduled to talk about her upcoming Christmas tour (yes, at the beginning of October). She was appropriately perched on her sofa in a festive red dress with a beautifully trimmed Christmas tree in the background.

But instead of talking about the tour, or, better yet, postponing the interview, Morgan decided to break the news of the massacre, which was still happening in real time, to the singer live on air.

Related: Jesus, Mariah — talk about phoning it in!

He then proceeded to show her footage of the horrifying situation as it was unfolding. Then he asked for her instant reaction.

Carey, like the rest of us, was completely shocked, and responded accordingly, telling Morgan: “That’s awful. I pray for the victims. I hope all this can stop.”

Shortly after the interview, she tweeted:

Horrified to hear about the shooting in #LasVegas. My thoughts are with the victims and their families. Praying for everyone's safety ??

But Morgan’s distasteful “got’cha” moment seems to have seriously backfired.

#GMB I feel sorry for Mariah, she should have been briefed about the shooting before the interview

people are DYING and some people are using this as a time to bash mariah carey for going through with a pre planned interview? fuck off

Piers Morgan to Mariah Carey on morning TV about Vegas shooting "What do you think about people who target concert goers?" Fucking idiot.

Mariah Carey had no clue what was going on in Vegas just like a lot of us didn’t and Piers Morgan blindsided her to try and make her look insensitive.

So tasteless breaking the Vegas news to Mariah Carey live on TV, shame on you @gmb

Give Mariah Carey a break. She was on GMB to discuss a Christmas tour not the Las Vegas shooting. It's not her fault she was blind-sided.

@piersmorgan @GMB have you apologised to @MariahCarey that was absolutely atrocious! #MariahCarey #GMB