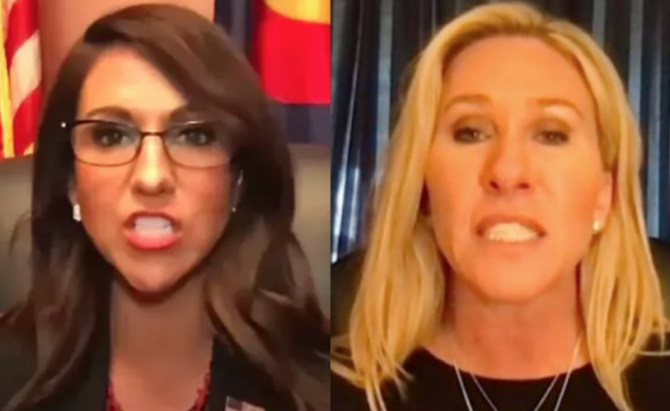 While Reps. Marjorie Taylor Greene and Lauren Boebert may seem like two peas in an ultra-conservative pod, a new report claims the two can’t stand each other.

According to piece in Politico about infighting among members of the right-wing, Trump-loving Freedom Caucus, Boebert is furious that she constantly gets mentioned alongside Greene. Greene’s appearance at a white nationalist conference in February drew criticism even from those within the GOP, Boebert among them.

When the House Freedom Caucus board of directors gathered last month, the two reportedly got into a fierce argument over the event which required intervention.

“Their confrontation grew so heated that at least one onlooker feared the Greene-Boebert back-and-forth might escalate beyond the verbal cage match had another board member not stepped in to de-escalate, according to a GOP lawmaker who was granted anonymity to describe what happened,” Politico reports.

“The incident was confirmed by three people connected to the Freedom Caucus, whose members largely avoided public criticism of Greene and Rep. Paul Gosar (R-Ariz.) at the time and focused their discontent on the event organizer, Nick Fuentes,” the report added.

The argument took place the day before both Greene and Boebert stood side-by-side an heckled President Biden during his State of the Union Address.