On Tuesday, Assistant Secretary for Health Dr. Rachel Levine made history (again) when she was sworn in as a four-star admiral.

This makes the former pediatrician the first female four-star admiral in the U.S. Public Health Service Commissioned Corps’ history, and the first trans four-star officer in any of the nation’s eight uniformed services.

It also makes her the highest-ranking official in the United States Public Health Service Commissioned Corps. In a statement, the HHS said Levine will lead the department’s 6,000 Public Health Service officers, respond to the COVID-19 pandemic and “build a stronger foundation for a healthier future.”

Many welcomed the announcement, and praised Levine, 63, for the knowledge, skills and experience she’ll bring to her new position.

However, far-right Reps. Marjorie Taylor-Greene (R-GA) and Lauren Boebert (R-CO) were predictably not among them.

Greene, in a tweet that has subsequently been hidden by Twitter but can still be viewed if you click on it, said, “A dude who lived the first 50 years of his life as a man isn’t the first female anything. China is laughing at us.” 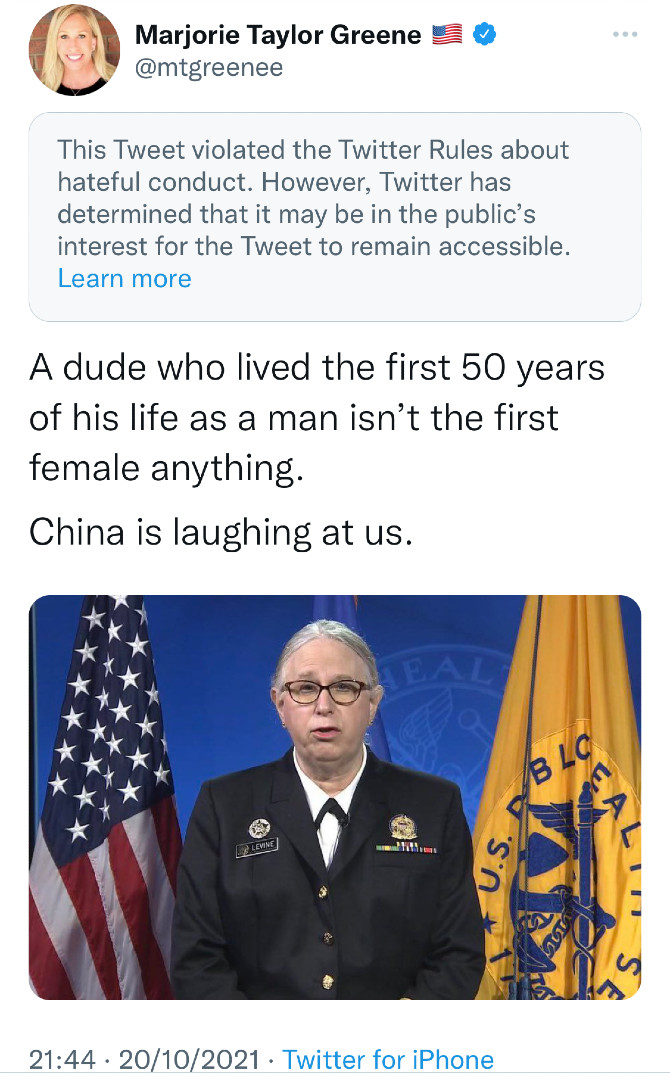 This is not the first time Greene has run into problems on the platform, and one wonders how much longer it will be before she is kicked off. Earlier this year, Twitter suspended her for 12 hours, and then in August, she was suspended for a week when she said the FDA should not approve Covid vaccines.

Greene’s views on trans rights are no secret. She erected a large sign outside her office declaring there are only two genders and blasted fellow Republican Caitlyn Jenner as a “man in a dress”. She has also criticized US embassies flying LGBTQ rainbow flags.

She posted a photo of Levine in her Admiral uniform with the comment, “Welcome to woke medicine, America.”

She followed it up with another tweet saying, “‘Admiral’ Rachel Levine… Because Democrats would rather hire a man for a job than a real, qualified woman. 💃🏻”

Because Democrats would rather hire a man for a job than a real, qualified woman. 💃🏻

Many were quick to point out Levine’s extensive list of credentials and qualifications.

Ah yes, someone who went to Tulane and Harvard, a highly trained physician. I can imagine you have no idea what that’s like.

Levine: graduated from Harvard College and the Tulane University School of Medicine and completed a residency in pediatrics and fellowship in adolescent medicine at the Mount Sinai Medical Center in Manhattan, New York. Boebert: GED

There are only 44 other four-star active-duty officers in all of the uniformed services.

When news of her admiral status was announced, Levine told our sister site, LGBTQ Nation she was humbled to be making history.

“This is a momentous occasion and I am pleased to take this role for the impact I can make, and for the historic nature of what it symbolizes. May this appointment be the first of many like it as we create a more inclusive future.”

When not mocking Admiral Levine, Greene spent much of yesterday ripping into the Jan 6 commission and attempts by lawmakers to hold former Trump advisor Steve Bannon in contempt for refusing to comply with a subpoena. This resulted in Greene getting into a shouting match  with Liz Cheney (R-WYO) and Jamie Raskin (D-MD) on the floor of the house and both Greene and Cheney blasting each other a “joke”.