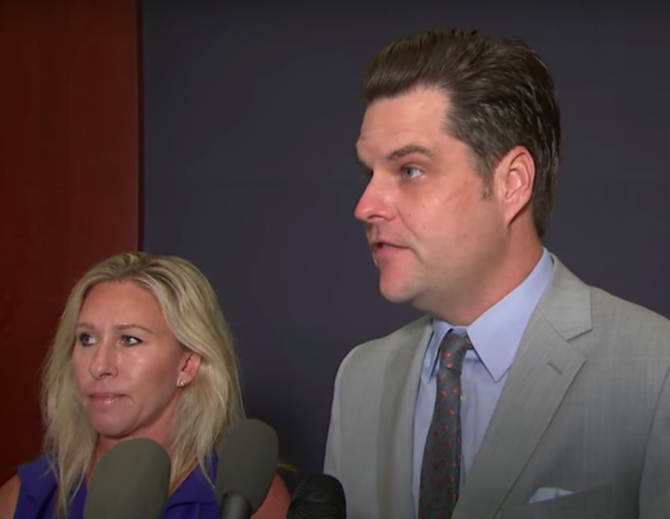 Hey, remember when Marjorie Taylor Greene and Matt Gaetz joined forces and embarked on that hate-fueled “America First” tour over the summer? Well, it turns out the whole thing was a complete bust.

Recent FEC filings for the Put America First PAC, which Greene and Gaetz co-founded together, show that they burned through $160,000 from July to September, but they only raised $57,000 during that same period, and now, they have just $13,000 left in their bank account.

Oh, but it gets worse. Because Mother Jones reports that, in addition to running their PAC into the ground with a money-losing summer fundraising tour, neither extremist is raising much for their own campaigns anymore either.

While Greene has raised an impressive $9 million since joining Congress in January, she wasted most of it on consultants and fundraisers trying to bring in even more. Unfortunately, her efforts didn’t pay off. In the last two quarters combined, she’s raised less than half of what she did in the first quarter of 2020.

As for Gaetz, that whole teen sex trafficking scandal he’s become ensnared in appears to have put a huge damper on his campaign coffers. He spent $100,000 more than he raised from July to September. On top of that, he raised considerably less than he did at the beginning of the year, before the scandal broke. And by “considerably less,” we mean he went from raking in $1.8 million in the first quarter of 2020 to just $527,000 in the third quarter.

So, what does this all mean? Well, aside from the obvious, that Greene and Gaetz suck at managing their money, is also suggests that Americans are over their attention-seeking shenanigans and done putting stock into them. And thank god for that.