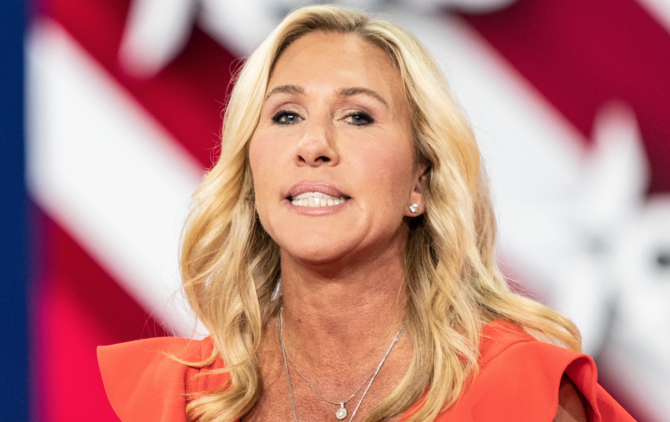 Rep. Marjorie Taylor Greene has some bizarre ideas about, well, everything.

Now the far-right congresswoman has offered her hot take on electricity, and let’s just say she’s not the brightest bulb in the chandelier.

Related: Marjorie Taylor Greene might want to delete this video before it’s too late

Specifically, she appears to be in disbelief about the existence of batteries — you know, those things that were invented in 1800 to provide power without the need for cords.

After learning that Air Canada recently placed an order for 30 electric airplanes, Greene expressed some rather dim concerns. True to form, she also managed to be as offensive as possible.

“Air Canada, get this, has ordered 30 electric airplanes…I mean, it shouldn’t surprise you, look who’s the president of — I mean, Justin Trudeau, right?” she told a crowd at the Texas Youth Summit.

It goes without saying, but Justin Trudeau is not affiliated with Air Canada.

Then she really went off the rails, comparing electric planes to… slave ships?

“We were talking, how is there an electric airplane and what does that look like?” she said. “Remember back a long time ago when you’ve seen movies where people in those slave ships and, they’re down there and they’re rowing, and they’re being whipped to row?”

“We’re saying, how are they gonna keep powering these electric airplanes, what are they gonna have, it’s like a spin class in a tube? Where they’ve got everybody riding spin cycles, and those mean nasty airline stewardesses that forced you to wear masks all the time on the plane…are they gonna be forcing you to like keep spinning to keep the airplane in the air? It’s absurd!”

Marjorie Taylor Greene joked that electric airplanes would be powered like “slave ships” with passengers forced to spin on exercise bikes by a “mean, nasty airline stewardess” in order “to keep the airplane in the air.” pic.twitter.com/FI8U6RV0YM

She followed up by saying she wants a “big, capable airplane”:

Heart Aerospace, the manufacturer of the short-range planes, explained in a press release:

“The new airplane design, called the ES-30, is a regional electric airplane with a capacity of 30 passengers and it replaces the company’s earlier 19-seat design, the ES-19. It is driven by electric motors powered by batteries, which allows the airplane to operate with zero emissions and low noise.”

Does she realise that she is using a cordless microphone?

How does she think that works?

This is one of the new leaders of the Republican party . . . what a bright (fossil-fuel powered) future 🌞 . . .

Now I’m offended as an engineer.

Last person who should be speaking to young people

Nothing like an American politician making jokes about slaves…

It’s a flight attendant. Not a stewardess.

In her defense, and given that most of their base believes Jesus walked with the dinosaurs anyway, would it really be so impossible for her to believe the Flintstones were real? Because that’s where she got it from. pic.twitter.com/TmZVCKZ4qv

I wish I could have been in the room when someone tried to explain to her how solar panels work.