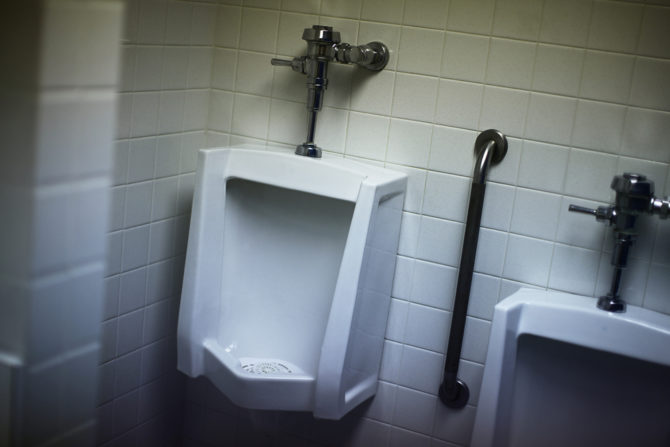 35-year-old Brent Hachborn says he didn’t mean to cause any trouble when he set up not one, not two, but three different spy cams in the men’s faculty bathroom at the James Hiller School in Ontario. He was only satisfying his latent bisexual urges, his lawyers argued.

The recordings were made between April 2015 and February 2016. Hachborn, a married father of two, was employed as a teacher at the school. Eventually, he was promoted to a vice principal position at a nearby school, but we would return to James Heller often to collect the tapes.

Several times a week, Hachborn would casually drop by to visit old co-workers and bring them coffee, then we would excuse himself to the bathroom, where he would swap out his cameras. He was caught after the battery on one of the cameras died and it started to make a beeping sound.

Police uncovered dozens of video recording and over 1,300 photographs featuring nine different adult men who worked at the school.

In March, Hachborn, now single and working in a restaurant kitchen, pled guilty to nine counts of voyeurism. His lawyer told the judge that his deep-seated “bisexual feelings,” along with repressed childhood sexual trauma, have left him with “an unfulfilled desire for oral sex with adult males,” which caused him to install the cameras.

On Thursday, Justice Robert Gee sentence him to eight months of house arrest, during which he can only leave for three hours on Saturday afternoons to shop for groceries or run errands.

Though prosecutors wanted Hachborn locked away for 15 to 18 months, the judge said the former educator had already paid a hefty price of his actions. Speaking to the court, Gee said:

Until Feb. 17, 2016, Brent Hachborn had it all. He was educated, married with two young children. He had been an elementary teacher at James Hillier for a number of years and was promoted within the school district. He was well-respected and admired, a homeowner who enjoyed a six-figure salary.

The judge added that Hachborn has suffered “consequences that will go beyond any sentence” of the court.

“His marriage has been destroyed by his behavior. He was respected, held an important position and could look forward to a good pension. Now he’s a pariah in the community he used to call home.”