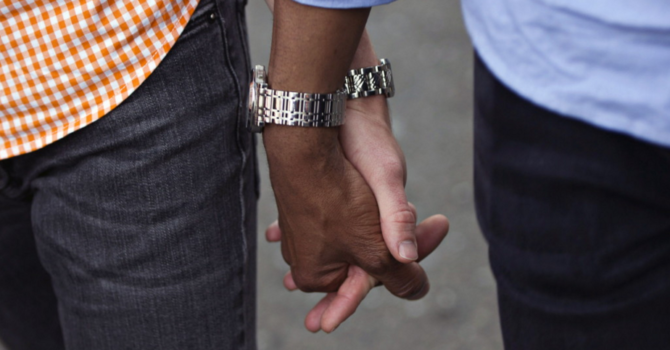 I’m in love with a man who loves me back. We adore each other, respect each other, and take care of each other. We’ve known each other for nine years, since I was halfway between 41 and 42, and we’ve overcome a number of hurdles (both together and separately) and communication fails to get to where we are now.

He’s the first thing I think about in the morning and the last thing on my mind when I drift off at night. We spent too many years separated by space, egos, armor, fear, and false assumptions. I feel fortunate to have found my way back to him.

I’m in love with a man, and he happens to be white. Race is not our only — or even our most — significant difference, though. He’s also 30 and Australian. When he proposed to me in a dive bar in Antwerp, “Yes!” flew out of my mouth before my mind had even processed the question. Our friends and family say they’re happy for us, as I’m sure many who read this will be. (Thank you.)

Of course, there will be those who will react with disdain — to us because we’re gay, to him because I’m black, and to me because he’s white. I’m already bracing myself for the onslaught of online critics who already disapprove of me for dating white in the first place. I presume most of them will be black because they have been in the past. They’ll roll their eyes and excoriate me for committing a sin against my race, if not mankind.

I’ve heard it all before: Gay black men who date white men lack black pride. Whatever. I can’t speak for others or comment on their motivation, but I shouldn’t have to. If the gender of whom we love is our business, then shouldn’t the race of whom we love be nobody’s business but ours, too?

As a black gay writer with an accent who frequently writes about race and sexuality, I’ve been open about my complicated relationships with both black and white people and the oppressive treatment I’ve experienced because of my race and from my race. My dating history has been pretty well-documented: I’ve been with guys of every race and find men of all colors attractive, but my long(ish)-term boyfriends all have been white and Latino.

I’ve fielded the criticism my candor has wrought, often on this very website. My detractors have called me a disgrace to my race because, presumably, I think white is better than black. (I don’t.) They’ve said I’m pathetic for “chasing” after white guys. I’ve never chased anyone I dated or slept with — white, black, Latino, Asian, Native American, or indigenous Australian. My romances and one-night stands all have been mutual-admiration affairs.

And of course, there’s the most popular charge: Being with a white man instead of a black one means I’m self-loathing, ashamed of my own blackness. Does that apply to all blacks who date and marry white or just gay male ones? Would anyone suggest that Alfre Woodard, one of our most esteemed black actresses, has a problem with her blackness because she’s been married to a white man since 1983? Should we assume that about Iman, David Bowie’s widow?

Would anyone dare to say that the legendary Quincy Jones has a problem with his race because he had seven children with five white women? (Well, Tupac Shakur did once, and he later apologized and ended up dating one of Jones’s biracial daughters.) Is his legacy as a black musician and producer, his contribution to black music and to black people to be discarded because he procreated with five non-black women?

From what I know about Jones, self-loathing is the least of his problems, and it is neither his responsibility nor the responsibility of any black person to date black or marry black in order to fix a Caucasian-created caste system that places a higher premium on white beauty. That’s going to take a lot more than blacks mating with blacks on principle.

I love myself, and if I could change anything about me, my race wouldn’t be one of them. That and my accent, the two things I was taught to hate growing up (the former, by whites, and the latter, by blacks), are now two of the things I value most about myself.

But I don’t have to sleep with a black man, date one, or marry one to prove my black pride or to reinforce the idea that black is beautiful. I’ve spent my life proving myself in so many ways. I won’t place the burden of proof on my love, too. I may value the approval of others more than I should, but my pride has its limits.

I value myself too much to seek white approval, and my husband values me too much to offer it. But I wonder if my alleged self-loathing extends to him, too. Does “internalized racism” also apply to gay white men who date black (and there are as many of them as there are gay black men who date white)? On the other hand, some would commend them for breaking off the chains of romantic segregation and daring to love black. Why is one man’s enlightenment another’s self-loathing?

Perhaps it’s a glass-houses situation, deflecting by people who need an absolute stranger’s love life to somehow validate their own beauty and self-worth. Disclaimer: A person dating one race exclusively or almost exclusively is their prerogative and shouldn’t be conflated with flagrant racist objectification and sexual discrimination, from writing “Asians/blacks/whites/Latinos only” or “No Asians/blacks/whites/Latinos” or “No spice, no rice” in a Grindr profile to declaring a non-attraction to an entire race, which has a dangerous and demoralizing effect.

Love is love, and loving someone, regardless of their skin color, is perhaps the least self-loathing thing a person can do. It’s an egregious double standard and the height of hypocrisy to preach about the right for gays to love whom they want to love while insisting that gay black men must love only other gay black men.

As much as I appreciate the black-on-black gay romance we’re seeing in movies like Moonlight and on TV shows like Pose, if we’re talking about a revolution, the most revolutionary act isn’t in a black man loving another black man. It is and will always be in daring to love at all.