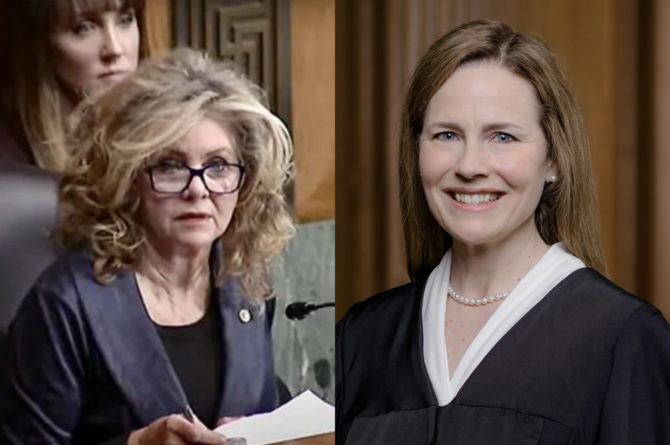 Justice Amy Coney Barrett has been trending on Twitter for the last 24 hours after The Guardian published a bombshell report about People of Praise, a Christian cult where she once served as a  female leader.

The report accused the group’s leader, Kevin Ranaghan, and his wife of taking part in “sexual displays” in front of children in the early 1990s. It also claimed Ranaghan showered with two of his daughters, who were 10 or 11 at the time, among other deeply disturbing allegations.

Barrett lived with the Ranaghans for two years in the mid 1990s while she attended law school. She graduated from Notre Dame Law School in 1997 and married her husband, Jesse, two years later. Jesse also appears to have lived in the Ranaghan household for a time.

There is no indication either of the Barretts participated in the chilling behavior described in the report, but after the story broke, people were rightfully pretty creeped out by the whole thing. Then yesterday evening, Marsha Blackburn entered the chat.

The former HSN-sales-gal-turned-antigay-congresswoman took to Twitter to defend the conservative Supreme Court justice by accusing the “radical left” of attacking her for being Catholic.

“No surprise that the radical left is attacking Justice Amy Coney Barrett for being a devout Catholic,” she tweeted.

No surprise that the radical left is attacking Justice Amy Coney Barrett for being a devout Catholic.

Amy Coney Barrett isn’t criticized for being a Catholic, but for being so religiously extremist that she cannot exercise separation of church and state. That is a disqualifying characteristic for a SCOTUS Justice.#ImpartialSCOTUS

Actually, Marshmellow, she is being attacked for being a member of People of Praise, a well-documented cult. That said, imposing her “devout Catholic” views on her #SCOTUS decisions (and lying about those views during confirmation hearings) should disqualify her.

Nice try with the propaganda. Our president is a devout catholic. There’s probably a different reason. Actually there are a lot of other reasons.

Separation of Church and State… It’s not in the Bible, It’s in the U.S. Constitution. (But you should know this, Marsha; you swore and oath to defend it.

The “radical left” as you called them supported and elected a Catholic president! Barrett is also a member of People of Praise and has lived according to their covenant. You might want to research that sect before making accusations.

We would like to add that several other government officials, including President Biden and Speaker Nancy Pelosi, are also devout Catholics, but they’ve managed to avoid getting wrapped up in weird cults that perform “sexual displays” in front of children.

People of Praise believes homosexuality is a sin and gay marriage is evil. Members who admit to engaging in any sort of homosexual activity are immediately expelled, and children with same-gender parents are banned from the group’s schools.

The group is not a church, but it does have 501(c)3 status, which means it doesn’t pay taxes on the huge amounts of money it brings in by forcing members to fork over 5% of their annual income to remain in good standing.

So far, Barrett has not commented about her alleged involvement, and the group has declined to confirm her membership.

Now, here’s what more folx have been saying on Twitter…

Scandal over Justice Amy Coney Barrett's religious group "People of Praise" deepens as court documents reveal that the group's founder allegedly regularly showered with his 10 and 11-year-old daughters. God these people are disgusting. ?

Based on Amy Coney Barrett’s belief system, she should be a housewife.

Amy Coney Barrett, a member of the Christian cult People of Praise, said during a U of Notre Dame speech:

No one, absolutely, NO ONE, is surprised that Amy Coney Barrett is part of a cult.

This is one twisted cult Amy Coney Barrett was immersed in — and perhaps still is.

…sexual displays in front of children. Don’t they call that….grooming?

If Amy Coney Barrett was secretly a member of the Taliban, would that get her kicked off the court? I see no difference other than language, head gear and radical religion.

Amy Coney Barrett declines to comment on reports that she was a "handmaid" in the Christian sect People of Praise, so alas, we will not get to hear The Handmaid's Tale.