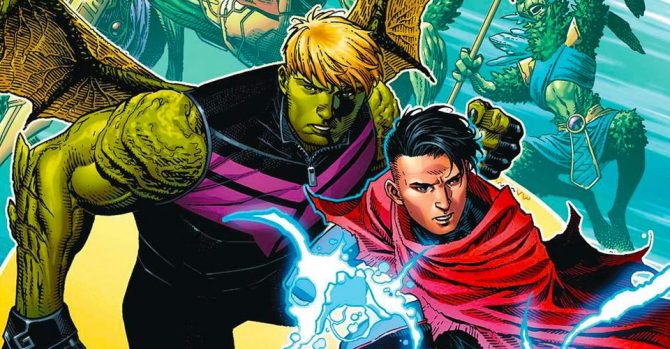 Longtime boyfriends Wiccan and Hulkling–two members of the Marvel Comics superhero team the Young Avengers–just made a breakthrough: they became the first gay superhero couple to get married in the history of the publishing label.

Empyre #4, saw the couple rush off to Vegas for a quickie wedding. The pair wanted to tie the knot before shipping off to crown Hulkling as the Emperor of the Kree/Skrull Empire. We’re guessing that means they’ll have a great honeymoon, too.

Hulkling and Wiccan both made their debut in 2005 and quickly developed a devoted following of “shippers;” that is, fans who thing friends have a little bit more than just a friendship going on. Creator Allan Heinberg later confirmed as much to readers, though the pair wouldn’t come out in-universe for some time. Since then, the couple has become a fan favorite, and at least one storyline has hinted that the two will later have children together in the future.

“It’s a good feeling to be able to deliver this kind of ‘shock ending’ for readers,”  “which hopefully lifts fans’ spirits a little rather than bringing them down.”

Here’s hoping Marvel avoids the common trope to superhero love interests: killing them off or incapacitating them at their happiest moment. Previously, a relationship between the Ultimate X-Men characters Northstar and Colossus ended with Northstar overdosing on drugs.