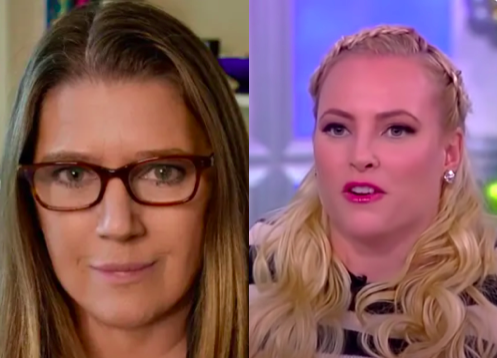 Mary Trump did not hold back when talking about Meghan McCain in a new interview with The Daily Beast published this morning.

Asked about being snubbed by John McCain’s daughter during a recent appearance on The View, Mary joked, “I think she’s just really kind and wanted to help me sell more books.”

“No, that’s not it,” she continued. “I think she’s a coward. And she’s afraid of people who are not only willing but able to call her out.”

As you may recall, McCain refused to speak to Trump earlier this month, resulting in Trump taking her to task in absentia.

Mary Trump, the only honest and decent Trump, calls out Meghan McCain for ditching her segment on ‘The View’. pic.twitter.com/sqYX6rKr3E

The two women famously butted heads last year when Trump went on The View to promote her first book.

Trump pushed back and, most people agree, made McCain look like a complete idiot.

“I’m pretty sure she probably remembers our first meeting,” she tells The Daily Beast. “It was the first time in an interview somebody had been rude to me and I pushed back.”

Trump added that the encounter with McCain ended up being “great for me” because “it was also sort of a confidence booster because I realized that I can do that. I can deal with stuff like that.”

She went on to say that, out of all the media appearances she’s ever done, McCain was the most disrespectful interviewer she’s ever encountered, a feeling many others can likely relate to.

“I literally can’t remember the last time somebody was that disrespectful to me,” she said. “I’ve done nothing to her.”

And as for being snubbed by John McCain’s daughter earlier this month, Trump says was fully planning to “eviscerate her” but “then I find out she’s not going to be on my segment even though I’d spoken to her producer for like half an hour.”