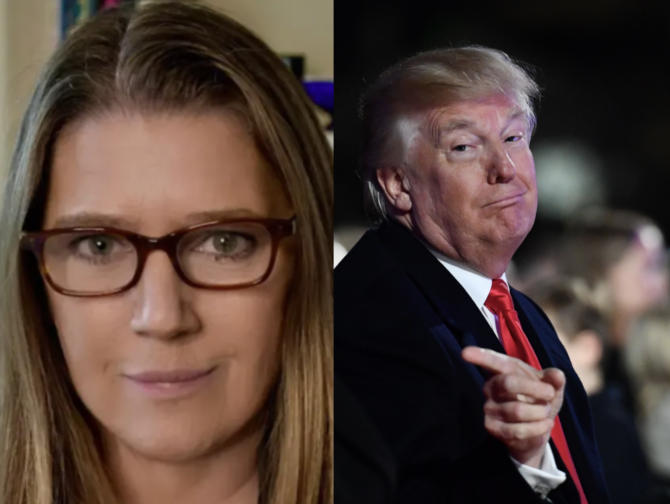 So far, bestselling author Mary Trump has never been wrong in her analysis and predictions about her crazy uncle, the twice impeached ex-president Donald Trump. Which is part of what makes her comments in a new interview with the Independent so chilling.

Mary, who holds a PhD in clinical psychology, describes her uncle’s mental state as deteriorating rapidly since leaving the White House roughly one year ago.

“Somebody with the degree and the seriousness of the psychological disorders he has does not get better without any kind of therapeutic intervention,” she explains.

Related: Mary Trump has another dire prediction about her cousins and it already seems to be coming true

“Like any other untreated illness, things just don’t miraculously get better, especially when you take into consideration the fact that he’s been under enormous amounts of stress. He probably suffered the greatest narcissistic injury of his life in 2020. And regardless of how many lies he tells himself or other people, he is a loser.”

She also has little hope for him getting better on his own, if at all.

“It would be, I think, impossible for him to have stayed at the same level or gotten better,” she says. “I absolutely think his condition has deteriorated.”

When asked about the House Committee investigating January 6, Mary says she’s been impressed with their work so far, but she also doesn’t think it’s going to have any impact on her uncle “because he’s so insulated.” It may, however, cost him supporters.

“But it will certainly start to peel people away from him,” she says. “Not the cult. But the 74 million people who voted for him weren’t all in the cult. They just don’t pay attention.”

Related: It sure looks like the January 6 committee is getting ready to subpoena Don Jr.

“There are plenty of people out there who really, if they’re just watching Fox News, they don’t really know what happened. But … if hearings are televised on a regular basis, then it’s very it’s going to become very hard for a lot of people to continue to be shielded from that those truths.”

And as for her uncle running in 2024, Mary seems confident that he’s going to make another bid for the White House, provided his mental health doesn’t completely crumble before then.

“If he’s able to keep himself together, why wouldn’t he?” she says. “He needs to [run] to continue to fend off all these challenges, but … in a just world, all of these criminal and civil things would be resolved well in advance of that.”

“Unfortunately, that is still a legitimate question, but it’s still a wrong one. The question should be why he should be allowed to run.”