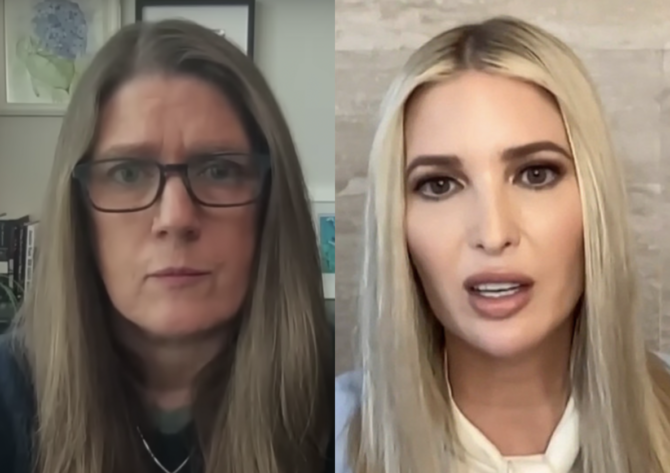 Bestselling author Mary Trump has weighed in on the family drama that unfolded between her uncle, Donald Trump, and her cousin, Ivanka, last week.

Speaking to MSNBC over the weekend, Mary said the ex-president essentially “accused” his daughter of “perjury” when he attacked her for her testimony in the January 6 hearing that aired last Thursday evening.

In case you need a recap: The House committee investigating the attack on the U.S. Capitol played a snippet of Ivanka’s testimony in which she said under oath that she “accepted” former Attorney General Bill Barr’s determination that the 2020 presidential election wasn’t rigged, despite her dad’s claims to the contrary.

“I respect Attorney General Barr so I accepted what he was saying,” Ivanka said when she spoke virtually to the committee for nearly eight hours back in April.

The ex-president responded to the clip by going on Truth Social and scolding his daughter for being a very bad girl.

“Ivanka Trump was not involved in looking at, or studying, Election results,” he wrote. “She had long since checked out and was, in my opinion, only trying to be respectful to Bill Barr and his position as Attorney General (he sucked!).”

When asked about this over the weekend, Mary said the father/daughter behavior was “exactly what I expected from both of them.”

“I think Ivanka walked a very fine line,” she explained. “She did not say anything necessarily incendiary but, as we thought would happen, she decided she needed to come down on the side of what the facts support.”

“Donald didn’t entirely throw her under the bus,” she added, “but I just think it’s really important to point out that the fact that he said she ‘checked out’, although that’s kind of rude, isn’t really the issue. He’s accusing her of perjury.”

Mary went on to predict that the future of their relationship will depend on how much they can benefit from one another, saying everything between them “is entirely transactional.”

“Once one or both of them come to the conclusion that there’s nothing in it for them, then they will move on,” she predicted.

She went on to say that she believes her uncle both “understands” that he lost the 2020 presidential election but at the same time he absolutely cannot face the thought of being a  “loser.”

He “cannot go there,” Mary explained. “Being a loser is just utterly unacceptable. … At this late date, one of the reasons people find the ‘big lie’ so convincing … is because Donald has come to believe it to a degree that makes the lie sound authentic.”