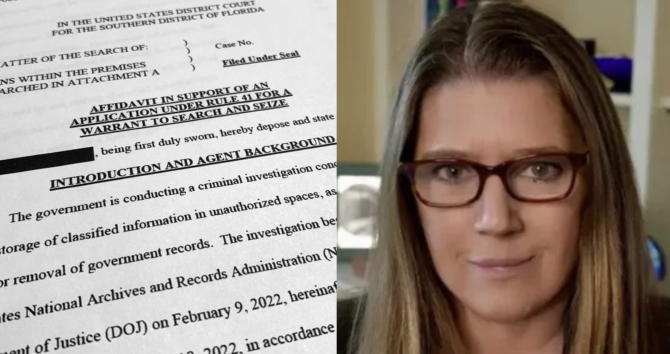 The U.S. Justice Department just released a redacted version of the FBI affidavit used to justify the August 8 search of the Mar-a-Lago and, wow.

The release of the affidavit was approved by U.S. Magistrate Judge Bruce Reinhart who said it could be unsealed after the DOJ submitted its proposed redactions. Reinhart, a Trump appointee, also approved the warrant that initially allowed FBI agents to search Trump’s Florida property in the first place.

Related: Some totally creepy sh*t has been going down at Mar-a-Lago for years, new book claims

Agents removed several boxes of highly classified documents, much to the ex-president’s chagrin. Now, thanks to the 36-page affidavit being released, we have a better idea of what those documents were and, um, holy sh*t.

So, not only was Trump illegally hanging onto classified documents, but they weren’t even being kept in separate folders. Our nation’s most top secrets were mixed together with a bunch of other random junk and miscellaneous items in boxes being store in the ex-president’s basement.

Shortly after the affidavit was released, Mary Trump appeared to call for her crazy uncle to finally be indicted, tweeting: “This should be enough, yes?”

This should be enough, yes?

We would certainly hope so!

“It was a beautiful affidavit, a perfect one. Nobody’s ever seen an affidavit like mine before.” pic.twitter.com/XhNEEFyux1

Affidavit says this about a former President's residence:

"Probable cause exists
to believe that evidence, contraband, fruits of crime, or other items illegally possessed in violation will be found at the premises" pic.twitter.com/1ksSdmHUUi

For the very first time in 76 years of wasted life, Trump will finally have his ass handed to him.

This affidavit makes it even clearer Trump should’ve been arrested already.

I guess it wasn't so great for Trump to have the redacted affidavit released after all.

There is no other way to put this: Donald Trump is fucked.