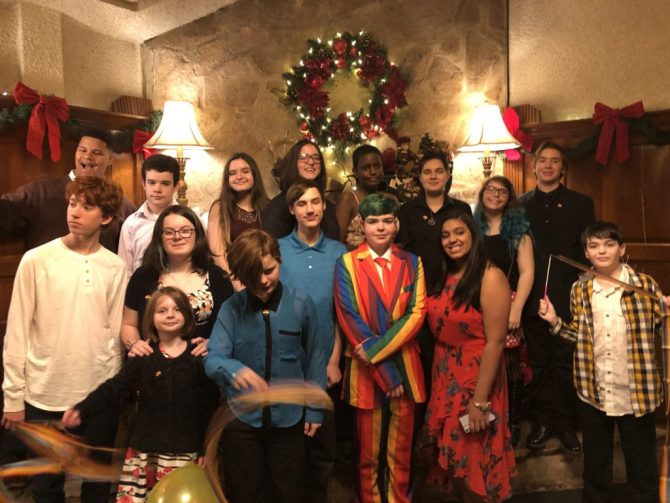 Hoping to be a true “support ally” when her 15-year-old son came out as gay, Heidi Irene did her research and discovered that many LGBTQ+ individuals have to come out again and again, since we’re often presumed cisgender and straight until proven otherwise.

“I thought to myself, I suppose that’s why people have coming out parties, so they can do it all at once and not have to come out as often,” Irene told PinkNews in a recent interview.

So she devised a beautiful way to announce reintroduce Aiden to the world in grand fashion: She and her partner, Terry Trammell, threw the teen a “gayceañera” — drawing upon the quinceañera parties that Latinx populations throw to mark teen girls’ transition from childhood to womanhood on their 15th birthday.

Related: Parents kick gay teen out of the house… to set up a coming out surprise party!

And so, on January 5, scores of Aiden’s friends and family members packed into the Sunset Restaurant and Lounge in the Glen Burnie, Maryland. There were rainbow tablecloths, Pride-themed napkins, colorful cocktails, and gymnasts twirling rainbow ribbons. Chefs prepared rainbow cakes. A family friend ran a photo booth. Aiden’s teacher served as disc jockey. There was even a trivia quiz all about Aiden, who wore a dazzling rainbow suit for the occasion.

Irene thanked the attendees for supporting both her son and “the LGBT+ community that he is now a part.”

“It was supportive for all the young people who attended to know that there are safe places and spaces where they may least expect it where they can be themselves,” she told the site. “The amazing thing was the servers and patrons who came up to me and would tell me their stories of maybe how they had not been accepted at one point, or their brother suffered from less than supportive parents. Others just came up to give me a hug and thank me for being a good parent.”

”When we support and we are supported, we can become allies for the younger generations, regardless of the past.”