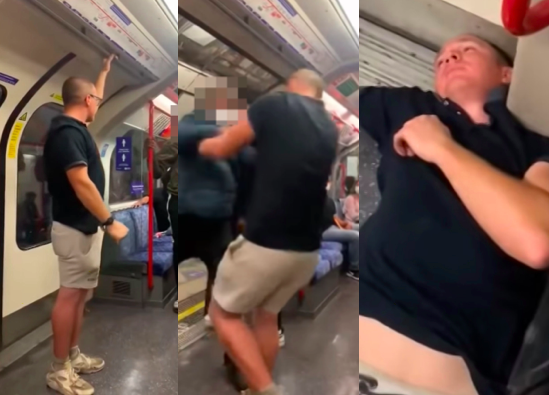 A maskless man was knocked unconscious after launching into a loud, racist rant on a crowded subway train.

The incident happened four days ago on the London tube. Viral video shows 31-year-old Billy Steele shouting racist remarks at a group of Black men, calling them “my pets” and telling other white passengers that “they’re lesser than us.”

“You’re Black… Oh my god!” Steele shrieks. “This is my home! You’re all going back!” Then he starts shouting for “violence!”

When a woman tells him to shut up, Steele responds by yelling at her to “f*ck off c*nt face!”

The train eventually pulls into a stop and the group of men Steele has been harassing quietly get up to leave.

As they walk past him, Steele puffs up his chest and balls his hands into fists. Then, without saying a word, one of the men punches him in the face, sending him flying backwards and crashing into the floor.

Speaking to the Daily Mail, Steele’s mother, Toni, says her son is “getting help for his behavior” and that he doesn’t plan on pressing any charges against the man who knocked him out.

“Billy is on this video that has gone viral,” she says. “He has gone to the police and owned up. He doesn’t want the man who hit him to be punished.”

A former friend of Steele’s adds that this isn’t the first time he’s gotten into trouble.

Two years ago, he was kicked out of a bar after harassing a female bartender then getting into a fist fight with another bar patrol.

“He was never a problem until the last couple of years,” the friend says. “This is when people started to distance themselves from him as it was starting to get difficult to go out with him.”

And a neighbor says Steele is not well-liked around the neighborhood.

“Billy isn’t the most popular of residents,” the person says. “He drinks quite a bit. He hasn’t been seen since the weekend. Nobody knows where he is or how badly he was hurt after being punched.”

A spokesperson for the British Transport Police says law enforcement is “aware of two videos on social media showing an incident on a Central Line Underground train on 15 August.”

Watch the video below. Fair warning: It may be unsettling to some people.