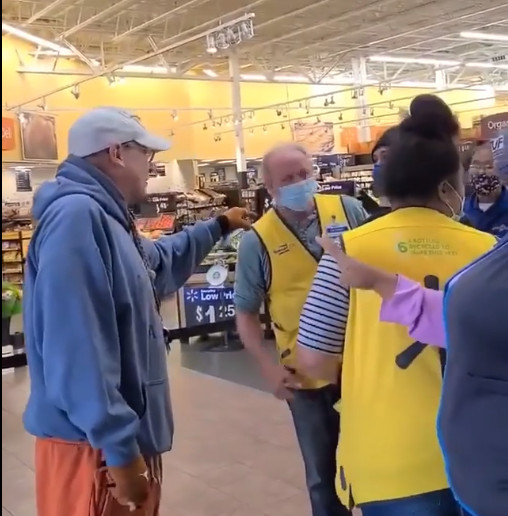 Shoppers in an Anchorage, Alaska Wal-Mart got an unplanned live show over the weekend. As employees asked a maskless shopper to leave the store, he began to rage and scream in religious mania.

“Get back on your highway to Hell and get out of a godly man’s face,” the man screams in the video. For the record, nobody was even standing close to him at the time.

“By your very blind ignorance, you don’t have the ability to even come up with your own f*cking ideas,” the man says, flipping the middle finger. Four employees thank him for his words, and ask him to exit again. “I believe when I have sinned…” the man stops short before demanding to see a manager.

“You have four managers here,” one of the employees says, again, telling the man to leave. He doesn’t comply, instead, continuing to scream about the store taking away his rights.

“Jesus Christ,” the man filming the video says in disbelief.

“Are you refusing my service? Why don’t you say we refuse your service,” the man screams. “I choose to yell and you cannot stop me. Please, return to your service of Satan and your ignorant belief in your rights. I have the right to life, liberty, and the pursuit of happiness. My happiness is best served by standing in your face and saying you’re a fool and wrong and have no authority over me.”

At that point, things start to get really tense. The man steps right in front of one of the female employees and begins yelling in her face. Nearby witnesses can be heard screaming “Don’t touch her” in the background.

To her credit, the female employee just folds her arms, unbowed. “Have a good day, sir,” she repeats over and over. The ranting man then begins to yell in the face of the witness recording video, before finally exiting.

In a statement to McClatchy News, Wal-Mart commented on the situation, saying: “It’s unfortunate that this individual chose to express their displeasure in such an inappropriate manner, but we’re proud our associates displayed patience and professionalism as they navigated this challenging situation.”

Having seen the full video, we have to wonder: at what point did wearing a mask somehow become a religious issue?