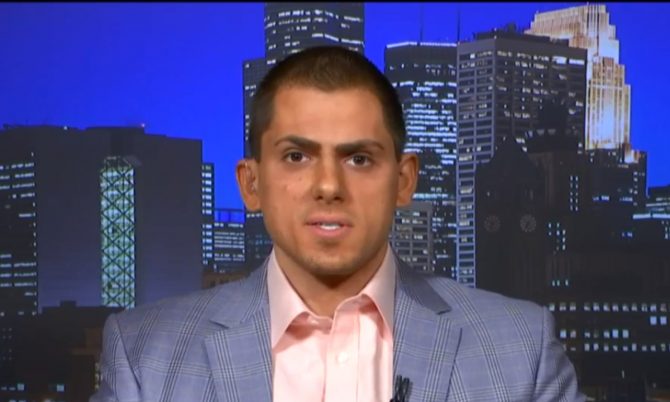 It looks like Rep. Matt Gaetz isn’t the only Republican who allegedly pays minors for sex.

30-year-old Anton Lazzaro is a wealthy GOP political strategist from Minnesota with deep ties to the state’s Republican party.

In addition to appearing on Fox News, Newsmax, at the RT Network, Lazzaro has donated thousands of dollars to some of the most antigay candidates in state and national politics, and he served as campaign manager for Lacy Johnson, who ran against U.S. Rep. Ilhan Omar in 2020.

Meanwhile, his alleged co-conspirator, 19-year-old college student Gisela Castro Medina, who attends a Catholic university in St. Paul, Minnesota and heads her school’s chapter of Minnesota College Republicans, was arrested in Florida last Thursday and is being held in Okaloosa County, which happens to be located in Gaetz’s congressional district. Ironic!

Now, the Minnesota Republican Party is scrambling to do damage control.

A dozen elected officials who accepted money from Lazzaro in the past rushed out statements over the weekend expressing their extreme shock over the whole thing and promising to donate all the money he gave them to charity.

Meanwhile, MNGOP Chair Jennifer Carnahan is facing calls to resign over her extremely close ties to the alleged sex predator.

“MNGOP Chairwoman Jennifer Carnahan must resign immediately,” GOP state Sen. Roger Chamberlain said in a statement. “The charges against Anton Lazzaro of sex trafficking minors are deeply disturbing, disgusting, and repulsive, and Carnahan’s close, ongoing relationship with him is troubling to say the least. I find it impossible to believe she didn’t know about his activities.”

Carnahan’s husband, vehemently antigay U.S. Rep. Jim Hagedorn, received the largest donation from Lazzaro out of anyone. His office just put out a statement calling the whole thing “deeply troubling” and affirming that “no one should be a victim of sex trafficking.” Duh.

So far, Carnahan has refused to step down, claiming she’s the victim of a smear campaign and that this an attempted coup to have her ousted from her leadership role.

In December, federal agents raised Lazzaro’s luxury condo in downtown Minneapolis, where they uncovered $371,240 in cash, a Ferrari convertible, and almost two dozen electronic devices, including 13 cellphones, several laptops, and a GPS tracker, as well as several bars of gold and silver worth over $1 million each.

Lazzaro’s attorney, Zachary Newland, issued a statement saying his client has been “falsely accused” and that he “looks forward to clearing his good name.”