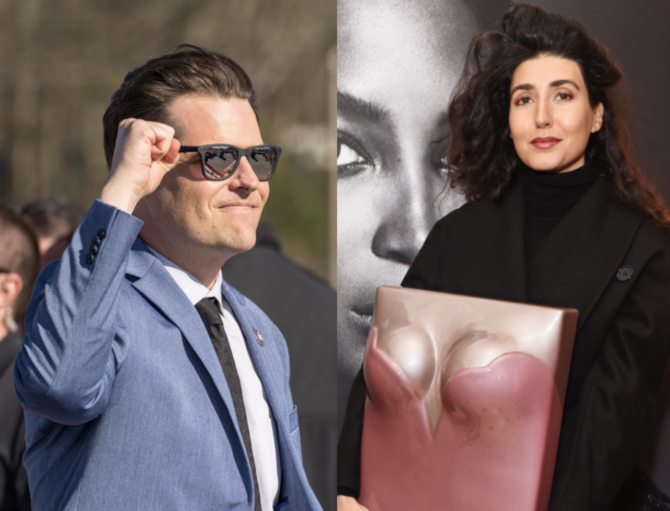 Matt Gaetz recently announced he’s running for re-election and he just got a glowing endorsement of sorts from none other than Osama bin Laden’s niece.

Noor bin Ladin went on Steve Bannon’s podcast this week to praise the anti-LGBTQ congressman, as well as Rep. Marjorie Taylor Greene and Sen. Ron Johnson, for defending the MAGA militia that stormed the U.S. Capitol on January 6, 2021.

In the interview, bin Ladin, a QAnoner who endorsed Donald Trump in 2020 by saying he was the only person who could prevent another 9/11, called the January 6 rioters “patriots that are being smeared and crushed by the media, by the Department of Justice.”

Related: Ivanka testified before the Jan. 6 committee yesterday and it sure sounds like some tea was spilled

She also accused the Department of Justice of silencing all forms of dissent against the Biden administration, which she referred to as “the regime”, and accused the U.S. government of failing to defend its citizens.

“This is traitor level, in my opinion, that those who are supposed to represent the citizens are failing,” bin Ladin said.

Ladin went on to applaud Gaetz, Green, and Johnson for siding with the Capitol rioters, many of whom have since been arrested and charged with crimes ranging from assaulting and resisting an officer to civil disorder.

“We can be really grateful for representatives–you know, Marjorie Taylor Greene, Gaetz and Ron Johnson–amongst the handful who are defending and standing up and speaking about these political prisoners,” she said.

Gaetz and Greene have both said in recent weeks that January 6 was not an insurrection, even though it was.

In an interview with Real America’s Voice back in January, Gaetz said: “We’re ashamed of nothing. We’re proud of the work that we did on January 6 to make legitimate arguments about election integrity.”

“That’s right,” Greene added, adding that she personally believed the attack was launched by the FBI “to ensnare, target, and trash a political movement.”

Noor bin Ladin currently lives in Geneva, Switzerland and is the daughter of Swiss author Carmen Dufour and Yeslam bin Ladin, the older half-brother of Osama.

So let me get this straight. We’re supposed to sit here and be lectured to about patriotism by Osama bin Laden’s niece? Do I have that right?

That’s all well and good, but coddling the niece of the 9/11 mastermind is nowhere near as concerning as emails. And laptops.

All you need to know 👇🏽 pic.twitter.com/AsCREAksGH

Imagine aligning yourself with a family member of Osama Bin Laden and thinking that’s a win for you?

Holy shit this is absolutely awful.

If 9/11 happened today, I’m not sure which side Republicans would be on.

The party of the poorly educated is devolving before our eyes.

Please, let us awaken from this nightmare