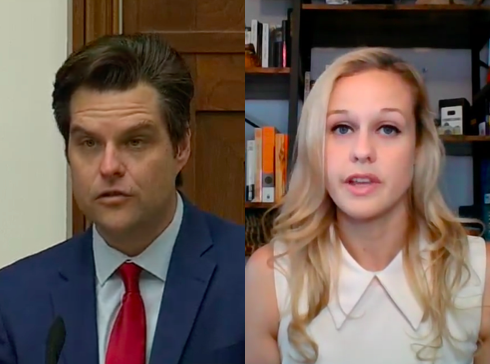 Rebekah Jones knows she’s not perfect. Far from it, in fact. But surely her sordid past can’t be any worse than that of Rep. Matt Gaetz, who is currently under federal investigation for potential underage sex trafficking and possible obstruction of justice.

After being fired from the Department of Health in Florida by Gov. Ron DeSantis for refusing to lie about Florida’s COVID-19 numbers, the 31-year-old whistleblower announced this week that she plans to unseat the antigay congressman in 2022.

“I had hoped that someone in the Republican Party would step up and primary him, and I’ve yet to see that happen,” Jones, who currently lives in Maryland, tells NBC News. “And so, if it takes me going home to Florida to run against Matt Gaetz, then I will do it.”

“If it means getting one child sex trafficker out of office, you’re damn right I’ll do it.”

As much as we’d love to see Gaetz ousted from Congress, we’re not sure how much money we’d bet on Jones.

Long before the pandemic propelled her into national headlines, she was charged with stalking her ex-boyfriend, who also happened to be her student at Florida State University.

Prior to that, she faced a number of other charges, including felony robbery, trespass, and contempt of court, stemming from an alleged violation of a domestic violence restraining order related to the same ex-boyfriend. The charges, however, were later dropped.

In 2017, she was arrested and charged with criminal mischief for vandalizing her ex’s car. Those charges, too, were later dropped.

And in 2016, she was charged with battery on a police officer, remaining after forbidden, and two counts of resisting arrest after she refused to leave her office when she was fired from Louisiana State University.

Most recently, Jones was charged with hacking into the state of Florida’s computer system. In December, law enforcement officers, acting on a warrant, raided her Tallahassee home and confiscated her personal phone and a laptop computer.

She has denied any wrongdoing in the case and claims the raid was retaliation for, in her words, refusing to “manually change data to drum up support for the plan to reopen.”

So, yeah, she might not be the most formidable candidate to challenge Gaetz for his seat. And even she seems to recognize this. But someone’s gotta do it!

“I hope I do better than a sex trafficker,” she says, acknowledging her less-than-flattering past. “It’s absurd that he’s still in office. Someone like that should not go unchallenged.”

Jones made the big announcement on Instagram after her Twitter account was suspended when she tweeted an article accusing DeSantis of being, again in her words, a “sociopathic liar.”

Gaetz has repeatedly denied the accusations of underage sex trafficking lodged against him. In yet another statement about the matter, his spokesman, Harlan Hill, said, “Congressman Gaetz faces no criminal charges. Ms. Jones cannot say the same.”