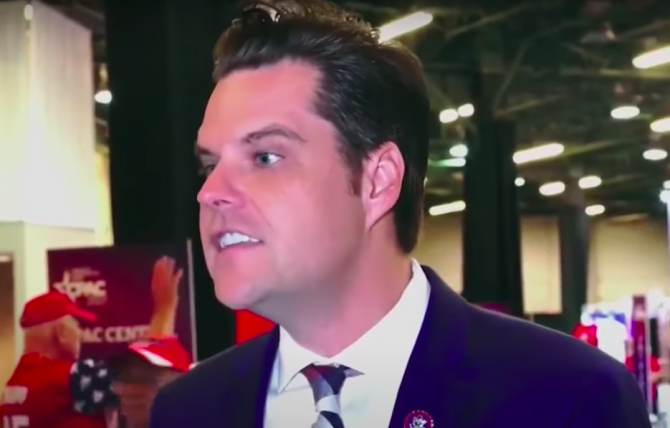 The sinking island Matt Gaetz lives on appears to be getting lonelier and lonelier with each passing day.

A new report from Business Insider claims the few friends he has left in the world are all paranoid about texting him because they assume the FBI is monitoring his communications.

We know what you’re probably thinking: Matt Gaetz has friends??? And, believe it or not, he does! Or, he did until he became ensnared in that whole teen sex trafficking scandal earlier this year.

“They know that there’s a massive investigation going on,” one friend of Gaetz tells Insider. “That makes people hesitant to reach out.”

Another friend adds, “It’s a natural sort of reaction. No one wants to inject themselves into anything while there’s 16 dozen people looking into everything that comes into that phone.”

Gaetz has denied all of the allegations against him and has not been charged with any crimes, but that hasn’t stopped those within his orbit from speculating.

Gaetz’s former classmates at William & Mary Law School recently received a save the date for their 15-year reunion next April. Some joked that Gaetz might attend with federal agents. His former law school classmates are “anticipating his indictment,” said one of his ex-classmates.

For now, Florida politicos, Washington Republicans, and others who know Gaetz say they’re waiting to see what’s next in the legal drama, even though the headlines have died down. “Everybody’s kind of sitting back with popcorn,” said one Republican source who worked with Gaetz in Florida.

Last month, multiple media outlets reported that the antigay lawmaker was preparing for a “scorched earth” trial and had hired several well-known New York City litigators to represent him.