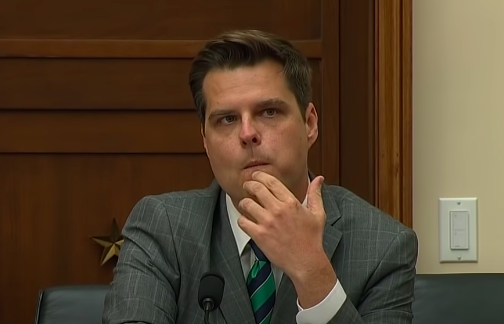 As the Federal Government continues to face harsh realities at home and abroad, Representative Matt Gaetz stepped up to do what he does best: troll.

And while it’s one thing to objectively criticize policy or action, that’s just not the Florida Republican’s style. Instead, Gaetz opted for tweeting an edited clip that gives the false impression President Biden “fell asleep” during a meeting with Israeli Prime Minister Naftali Bennett.

Gaetz even took it one step further, joking that the president might be dead.

“Send Kamala in to see if he can fog a mirror,” Gaetz tweeted along with the video, which is only 22 seconds long because it was selectively clipped from an 11-minute C-SPAN broadcast of the full meeting.

Send Kamala in to see if he can fog a mirror. https://t.co/W4oLhujC0w

For anyone wishing to see how Biden actually conducted the meeting, which took place on Friday at the White House, the full video is on YouTube. It shows the president actively listening.

About 10 minutes in, Biden looks down for several seconds, hands folded. Then he looks back up and responds to Bennet. If anything, the clip Gaetz shared shows an intently focused president in action.

Shame on you for sharing this. This is altered and you know it.

He is actually listening, give it a try

No ones falling for it, Matt

That's how Matt checks on his guests at his teenage slumber parties.

So, you have finally sunk to the depths of sharing altered video. Great job, Matty, you've reached your bottom.

This has been disproved. Stop.

LOL, No Matilda. That's what it looks like when you are truly listening.
Noticed the difference didn't ya.
You have either forgotten that skill or you were asleep when someone was trying to teach you.

Are you really a member of the House of Representatives? Hard to believe that you are.

This is an altered video, and you know it, yet you keep it up. What else are you comfortable deceiving others about, Matt?