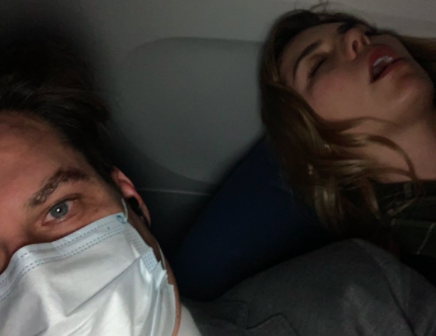 Before getting married over the weekend, Rep. Matt Gaetz did a super creepy thing and tweeted a photo of himself on an airplane staring glossy-eyed into the camera with his soon-to-be-bride, Ginger Luckey, passed out beside him, her head back and her mouth hanging open as though she’d just been roofied.

Pretty much everyone agreed that the photo was disturbing, especially considering that the antigay lawmaker is currently under investigation for allegedly sleeping with a high schooler. Oh, and because he’s been accused of pressuring numerous women into doing drugs before sleeping with him. And also because he has a reputation for sharing women’s private nude photos to colleagues on the House floor.

Of course, the real victim here is Luckey, since the picture was seemingly taken and shared without her consent. To prove that she’s a cool chick who’s not bothered by any of it, she retweeted the photo along with the caption, “No shame in a little beauty sleep.”

No shame in a little beauty sleep ??? https://t.co/lJvYtLspU7

We suppose it’s good that she’s not upset, since a lot of people would be; however, her making light of the situation didn’t land well with commenters, many of whom felt the need to tell her that she deserves better than a guy who posts humiliating photos of her to the internet the day before their wedding.

Here’s how they responded…

That doesn’t look like sleep, it looks like passed out from something. And there’s nothing beautiful about it.

If a man is wanting to post this pic of you to the world, with or without your permission, it means he thinks very little of you. You need to be w/ppl that treat you well. Would you honestly let a parent or friend share this picture & not be angry as hell?

How are you not creeped out by this guy taking a picture while you’re asleep and posting it to social media?

Ginger, does Matt take photos of you and do things to you without your consent regularly? This is a red flag. Heed the warnings ⚠️

No self respect. No integrity. No dignity. I’m glad my husband treats me with respect, unlike Matt treats you. Why would you be okay with this?

Respectfully, don’t let him use you like that. By letting him objectify you, particularly in public, you’re facilitating and encouraging his gaslighting, his passive aggressive behavior, his narcissism, and his complete lack of empathy.

Your self respect meter just bottomed out.

He posts an extremely unflattering picture of you (sorry) to humiliate you and you think it’s cute? Girl…get out and get help.

No shame in beauty sleep, ’tis true. Shame in choosing to be with Matt Gaetz, on purpose? That’s a whole different matter…

Gaetz and Luckey were married last Saturday on Catalina Island in California. Vanity Fair described the wedding as a “quiet ceremony” with about 30 guests. Among them was Gaetz’s alleged son, Nestor.