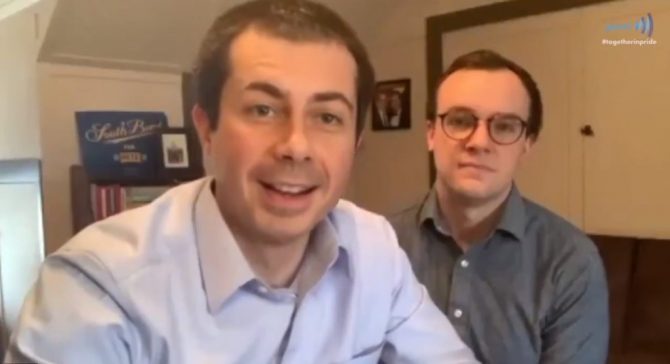 Former presidential candidate Mayor Pete Buttigieg has opened up about the support–and pushback–he got from fellow LGBTQ people on the campaign trail.

During a GLAAD Livestream hosted by Billy Eichner, the 38-year-old former mayor of South Bend, Indiana addressed his history-making candidacy as an out, married gay man on the campaign trail. He also talked about the criticism he received from some corners of the queer community.

“I think our LGBT+ community is going through that generational experience,” Buttigieg waxed. “I wonder if for some people it was empowering, in terms of a group that’s so close to the edge in terms of marginalization, to frankly feel empowered to be queer and to not vote for [an out-queer candidate]. One generation’s just astonished that there can even be a candidate who is queer, but I think for some others, it might have felt empowering to be able to be queer and not vote for a candidate who is queer. On some level, I get that. I just hope that people can have whatever their political views are and not be mean.”

Buttigieg went on to elaborate on some of the “mean” views he and his husband Chasten endured during his run. While some of the criticism came from political opponents who attacked him for being gay, ironically, Buttigieg also had to suffer attacks from other LGBTQ people who found him too mainstream.

.@PeteButtigieg and @Chasten joined @billyeichner on #TogetherInPride to discuss the importance of voting and being engaged in the political process. pic.twitter.com/sLmVQMNsxM

“People could say really, mean, awful, untrue things about you, but they don’t know the first thing about you,” Buttigieg said. “They don’t know what I went through or what my story was. I reminded myself I’m worthy of love and trying to do my best, and if people don’t like something about my husband, then that’s their prerogative, but I will never look down on myself for not meeting the definition of some gatekeeper somewhere, on am I gay enough, am I not gay enough.”

Buttigieg scored a major victory by winning the Iowa Caucus, the first Democratic contest for the 2020 Election cycle. He dropped out of the race and endorsed Vice President Joe Biden March 1.