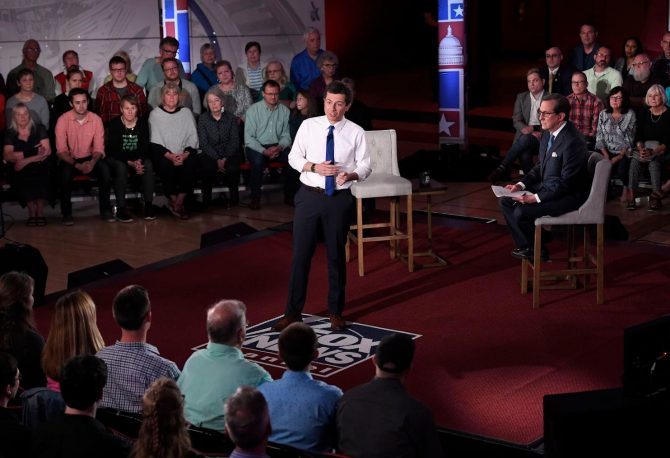 Democratic Presidential candidate Mayor Pete Buttigieg has lashed out at Donald Trump following a trifecta of shootings over the weekend.

While appearing on CNN August 6, the South Bend, IN Mayor criticized Trump for his violent rhetoric, and for stirring up white nationalist hatred during his presidency. When asked whether Buttigieg would accept a visit from the President if the shooting had been in South Bend, the mayor gave an unequivocal no. Trump has been uninvited to El Paso, Texas–a site of one of the shootings–by the local mayor.

“Ordinarily… [a mayor] would automatically welcome a visit from a President of either party,” Buttigieg said, “because you know that he would be there to help you…to help bring people together, to help those who are hurting, and to help keep people safe. The problem is, right now, we’ve got a President right now who is part of the problem and incapable of bringing people together. This morning, he was on Twitter doing the exact opposite. The whole idea of the symbolic role of the presidency–which is just as important as the policy role–is that it is an office that can bring people together.” “Sadly,” Buttigieg added, “we are lacking that critical function of the Presidency. When [Trump] shows up, you know the politics and the divisiveness will be part of what he brings to the town.”

When asked what Trump should do, Buttigieg didn’t mince words. “It’s too late for him not to be a white nationalist, and to not bear some responsibility for what’s happened here,” he said. “What he could do is refrain from divisive and politicizing rhetoric, and focus on making something happen. How about some action? I remember his inaugural speech where he said American carnage stops right now. I remember back when he said he was going to actually do something about guns before the NRA [National Rifle Association] put him in his place and reminded him that he’s not allowed to say that.”

Buttigieg also unveiled his own plan for gun control.

"Anyone can have a slingshot, nobody can have a nuclear weapon," says Mayor Buttigieg about his plan to have stricter gun laws. "We have decided all along that there's a line to be drawn somewhere. Clearly we need to draw that line tighter."https://t.co/hmzJ6fguwO pic.twitter.com/i7ZqwRKruK