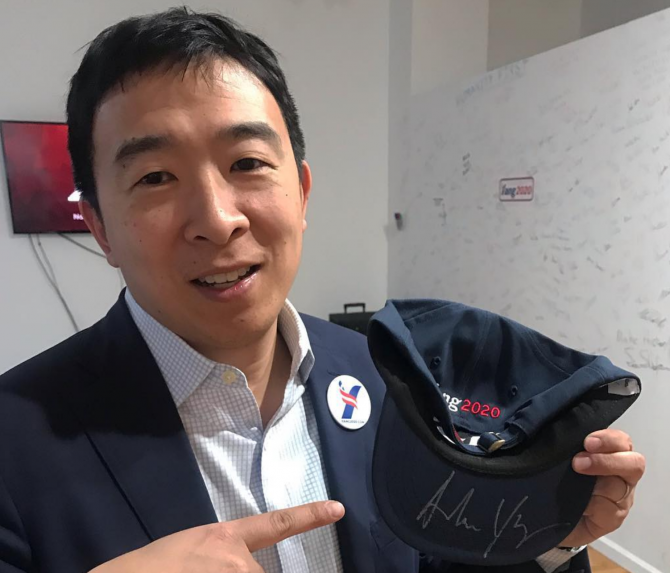 It’s too early to tell whether Andrew Yang will make the cut — so to speak — for the 2020 Democratic presidential bid, but the New York businessman is being hailed as the first U.S. presidential candidate to oppose circumcision, having come out against foreskin removal earlier this month.

Related: Amazon is selling a circumcision training kit for $200, and the Internet is freaking

Yang made his stand on Twitter after a user replied to a tweet of his regarding the opioid epidemic. In a bit of a non sequitur, the user asked Yang if he had an opinion on routine infant circumcision.

“Negative on it,” Yang replied. “Against the practice.”

The 44-year-old then doubled down on the stance in a follow-up interview with The Daily Beast, saying he would make it public policy to “inform parents that it is entirely up to them whether their infant gets circumcised, and that there are costs and benefits either way.”

“It’s sort of pushed on parents in many situations,” he told the site, describing circumcision as a “cultural onus” imposed on parents.

Yang also said he is “highly aligned” with intactivists, i.e. anti-circumcision activists, who argue that foreskin is both easy to clean and beneficial for sexual pleasure. (The American Academy of Pediatrics, meanwhile, contends that the benefits of circumcision include the prevention of urinary tract infections, penile cancer, and the transmission of certain STIs.)

“The more choice we give parents, and the more we diminish the possible preconceptions or misinformation various parents are receiving, then the better off we’ll be as a society,” the presidential hopeful added.

And in case you’re wondering, Yang declined to specify whether he himself is circumcised.