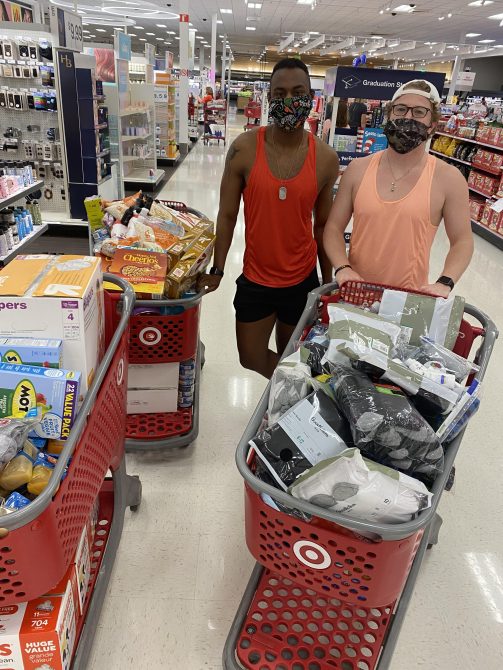 Justin Rabon loves telling the story about coming out to his best friend, Brad Neumann, via text while in college, thinking his friend was not gay. Before long, the two were dating. The couple transferred to the University of Minnesota, where they starred on the track team together. The two are together to this day, working overtime to support the daily protests in Minneapolis. We caught up with Justin about the state of Black lives matter in the Twin Cities.

What are you up to now?

I work at Insight Global, but thankfully they’ve allowed me to take off as much time as I need to personally heal and do whatever is necessary. I can’t thank them enough for this.

For the community, I’m helping with drop-offs of for people in the areas that were most affected by the protests. Brad and I raised around $7,000 in the last 36 hours to do our part. In addition to that, I’m working on simply educating those around me on the reason why we as a community are fighting so hard.

What was your initial reaction to the murder?

Fear and a sense of hopelessness. For the first few days, I shut down, tried to drown everything out, and eventually that led to a breakdown. I couldn’t get out of bed because I was stricken with sadness and fear.

How did that lead to your involvement in supporting the protests?

My role is to educate people on why we protest, how to protest, and how to support the protest in a revolutionary time. I’ve had previous bad experiences in the past with protesting myself, so I haven’t gone to as many protests as I would’ve liked, but I’m trying to make up for it in other ways through donations, supply organization and drops-offs, and volunteer work. I am still attending protests, but in the beginning, I was too scared to do so being a black man.

What do you think of the threat to call in the military to cities like Minneapolis?

Simply put, I hate it. More military/police is more violence and danger to our community and the members of it who are trying to heal through protest.  These protests are peaceful–until they show up.

Why is it important for athletes to speak out?

It’s important for EVERYONE to speak out, but for someone like myself, I feel an extra personal obligation to utilize my platform and voice in order to educate people. Silence is violence!

What does this all say about the November election?

I pray and pray that this momentum carries forward. With how things are looking now, I think this gives SO much more ambition and fight to vote out 45.

This is taking place in pride month, the 50th anniversary of the first march, which was more protest than celebration at the time.

Seeing that connection is absolutely wonderful. While it should not have taken 50 years for a revolution like this to take place, I still couldn’t be more proud. Trans women of color began that movement for the first march, and I just want to make them proud following in their footsteps with all that this country is doing to end systemic racism and police brutality.

I want to send a resounding thank you to all of those around me constantly fighting and uplifting the community with protests, organizing, and just plain love. My friends, family, and peers have checked in with me periodically for this past week, and those check-ins are what gave me the strength to get back up and begin fighting, especially at a time when my life felt worthless. Thank you to everyone.