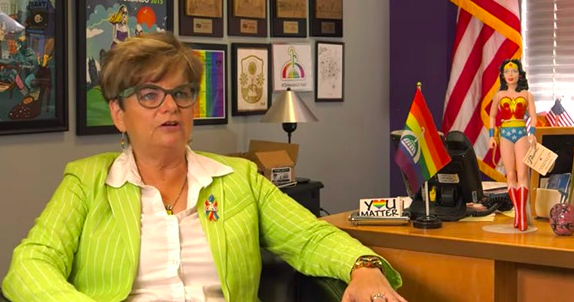 It is fair to say that Patty Sheehan is among the best golfers in history. She joined the LPGA Tour in 1980, quickly racking up six major championships and 35 victories. She is a member of the World Golf Hall of Fame.

Yet, much like Layshia Clarendon, Sheehan’s greatest accomplishment, at least in our book, is the way in which she has used her platform to embrace great causes. From funding women’s charities via her celebrity golf tournaments to serving on the Orlando city commission, where she is the first lesbian elected and in her sixth term, she is the very model of star athlete turned successful advocate, a pivot few have managed with such aplomb. In conservative Florida, Sheehan, who is raising two kids with her partner, Rebecca Gaston, led the way to passing non-discrimination protections and domestic partnership legislation years before marriage equality was handed down by the U.S. Supreme Court.

In 2017, Sheehan unveiled a memorial to honor the 49 victims of the June 2016 Orlando Pulse nightclub terror attack, a labyrinth at Colonialtown Square Park. The rainbow heart at the center of bricks featuring the names of each victim.

It was only last year that we learned the deep personal wounds that drive Sheehan’s passion for justice. In an interview with Truth Wins Out, Sheehan describes becoming incensed when she learned that an Orlando-based “ex-gay” conversion ministry had applied for a permit to gather in the city she had worked so hard to make safe for everyone. Years earlier, despite being one of the greatest athletes on earth, she had suffered a kind of emotional torture at the hands of a similar group.

“It took me a long time to be able to heal from the abusive things I was told about who I could be as a woman and how I could positively express my sexuality,” Sheehan explains in the video. “Do not as a young person, do what I did. It took me years, a lot of substance and alcohol abuse, and personal suffering and bad relationships for me to be able to self-accept. A lot of it because what I was told was wrong with me when I was around these religious people.”