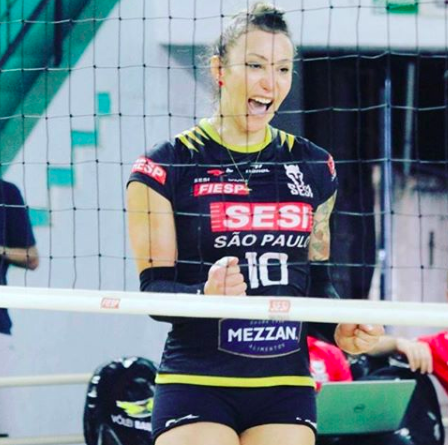 Tifanny Abreu had her sights set on becoming the first transgender Brazilian to compete in the Olympics this summer in Tokyo. That dream is deferred until next year, but it hardly would have been her only accomplishment. She was the first trans woman to play in the Brazilian Women’s Volleyball Superliga. Before that, she competed in the men’s league in Brazil as well as championships in the leagues of Indonesia, Portugal, Spain, France, the Netherlands, and Belgium.

For most athletes, this would be accomplishment enough. But that Abreu has achieved this level of play while facing down fierce critics in an increasingly reactionary country where trans people are frequent victims of discrimination and even murder is all the more remarkable. While a member of Belgium’s JTV Dero Zele-Berlare, Abreu underwent sex reassignment surgery. In 2017, she received permission from the International Volleyball Federation to compete in women’s leagues.

But Abreu is not content to change attitudes on the court. In 2018 she ran as a candidate for the Brazilian Democratic Movement Party. She lost, but the campaign was a breakthrough in a country that just one year later would elect perhaps world’s most anti-LGBTQ president, Jair Bolsonaro.

Abreu, 35, says the future of the nation will be different, referring to her young female fans who follow her around the country, watching her play:

I am so proud to be able to be a model for them so they can grow up and play sports, too. The little girls who are inspired by me and also the young [trans] people.